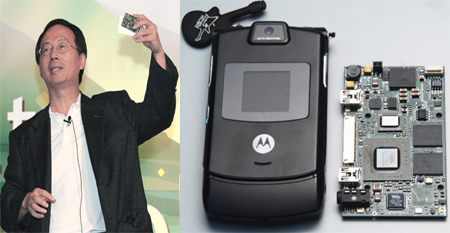 Chipmaker VIA Technologies has developed a new small form factor motherboard that is roughly the side of a business card. A while ago, the company had uveiled the palm-sized VT6047 Pico-ITX motherboard. Now this newly unveiled one is almost the size of a credit card.

VIA’s tiny motherboard is called Mobile ITX and measures around 7.5 centimeters by 4.5 centimeters. In spite of its small form factor, this motherboard is able to pack in all components required by a personal computer including a processor, a chipset with integrated graphics, memory and video capabilities.

According to Mr.Wenchi Chen, President and CEO VIA Technologies who unveiled the prototype of the new motherboard Mobile ITX, “The new motherboard design, which should hit the markets next year, will make possible a range of small, powerful computers such as super smartphones.”

“The new motherboard has been designed, moving beyond the traditional desktop and laptop era. This will help design a new generation of devices that will be called PC2.0 era, which will be smaller, lighter, quieter, energy efficient, more portable and affordable,” Chen added.

VIA Technologies new and diminutive Mobile ITX motherboard has a CDMA chipset.

Wenchi Chen also said, “In another year or two, we will come out with even smaller form factors.”

The company believes that integration of several components in the coming future would enable them to further shrink the size of the motherboard.