Vertu has rolled out the Ti Ferrari luxury smartphone and it is set to be made available soon at a price of around $16,309. As of now, countries like Singapore, Malaysia, Indonesia, Thailand, Vietnam, Cambodia, Australia and the Philippines are the only ones that will be getting the exclusive Vertu Ti handset, according to CNET. This Android-based phone adheres to the company’s premium principles and features a host of design traits modeled along the lines of the F12 Berlinetta, which go on to justify its price tag.

The front pillow of the Ti Ferrari has been granted a material called Alutex, which is used within the interiors of the car. Two leathers – red and black – used in the Prancing Horse’s vehicles have been stitched onto the rear of the phone, whereas another interesting addition is its specially rounded camera inspired from the F12 Berlinetta’s tail lights. Diamond Like Carbon (DLC) coating, which is used by the Italian car maker to guard its engine and transmission components, also makes its way onto the body, aside from a grade 5 titanium casing. 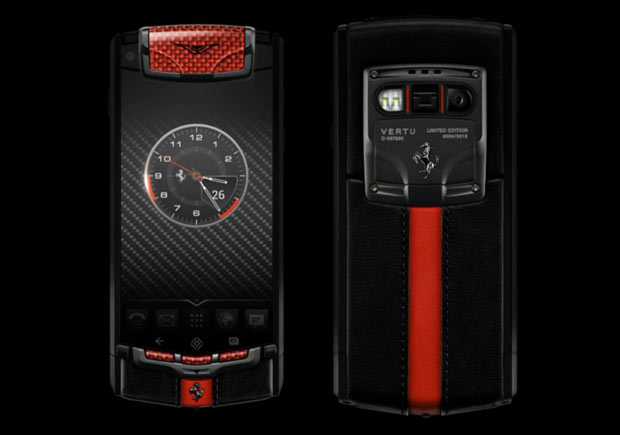 It has been equipped with a 3.7-inch WVGA display, and draws power from a dual core Qualcomm Snapdragon processor clocked at 1.7GHz. Moreover, it has been infused with the Ice Cream Sandwich version of the Android OS, and even features an 8MP primary camera and a 1.3MP front snapper. The Ti Ferrari also kicks in 64GB worth of internal storage memory, apart from Bluetooth v4 + LE, NFC and other essential connectivity options.

The Ti Ferrari will also be loaded by its makers with unique ringtones, apps and other utilities aimed at keeping with the Prancing Horse flavor.