Rumors about the Motorola Droid Turbo are of no shortage at all, but it’s only now that we’ve got concrete details on the handset’s design and features. A leaked user manual is the source of the new information, but sadly, it doesn’t offer much information where specs are concerned.

What we can conclude is that the Motorola Droid Turbo will have a 5.2-inch display, albeit the panel type and resolution is still a mystery. Previous leaks have suggested that visuals will be delivered at 2560 x 1440 pixels aka 2K resolution. Design-wise, the phone isn’t modeled after the Moto X which is quite surprising and there will be physical navigation keys on the front instead of virtual ones. 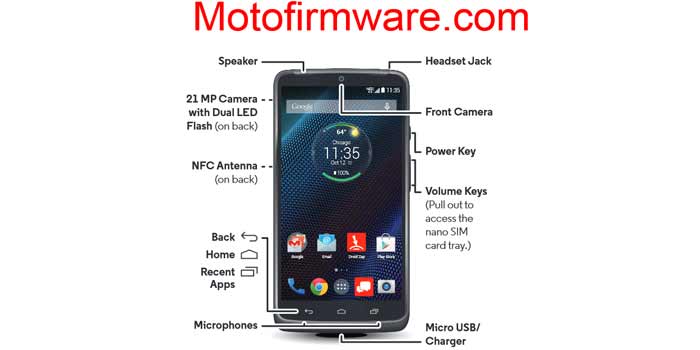 The back panel however, will be similar to the latest Motorola phones as it offers the company’s logo just below the camera unit. Speaking of which, the leaked manual posted by MotoFirmware also reveals that the smartphone will have a 21MP sensor with 4K video recording, suggesting that the Turbo will be going up against Sony’s Xperia Z3 handsets and even Microsoft’s PureView phones.

There will be dual LED flash lights as well, one on each side of the camera. NFC and Qi wireless charging have also been mentioned in the 72-page document. That’s about all the noteworthy information we’ve got from this leak and for other details, we’re going to have to rely on previous reports.

There’s still no launch date for the Motorola Droid Turbo, but seeing as the phone’s UI shows October 12 which is a few days away, its official unveiling might be just around the corner. Verizon is also expected to get refreshed versions of its previous Droid lineup.