Verizon is seemingly preparing to lure its customers with a new LTE tablet of its own branding. While the carrier already has a 7-inch tablet serving this purpose, it is now apparently planning to explore the 8-inch category, as evidence of such a product being under development has been spotted in the wild.

The ODM which the American carrier has chosen to create this rumored 8-inch tablet is a Taiwanese company named Quanta. It appears that the tablet PC is in the process of acquiring certain certifications from regulatory agencies since it has been caught on the websites of two such bodies. 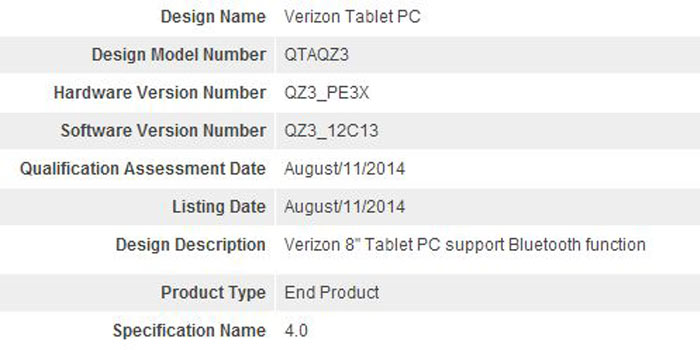 As revealed by a post on Liliputing, a listing on the Bluetooth SIG spoke about a ‘Verizon Tablet PC’ which possesses support for Bluetooth 4.0. The model number it bears is QTAQZ3, and running a search of it on Google reveals that the Wi-Fi Alliance has also certified the 8-inch slate recently.

While we new know what size display this tablet PC will carry and the fact that it will feature support for Wi-Fi and Bluetooth 4.0, other important details about it are still unknown. Since it will be sold by Verizon, it’s almost certain to grab LTE support though so there’s no speculation about that.

Verizon is currently offering another tablet of its own named the Verizon Ellipses 7 which features a 7-inch 1280 x 800 pixel screen, a quad core processor and the Android 4.2.2 Jelly Bean OS. It is being sold at a price of $50 with a two-year contract.

Whether Verizon will choose the same pricing model for its upcoming 8-inch tablet or not depends upon its specifications which are still under the hood.