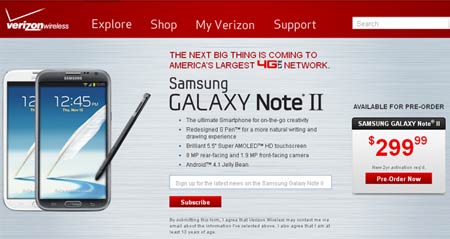 The Samsung Galaxy Note 2 has come to Verizon Wireless and it has a price on par with variants available through other network providers like U.S. Cellular, Sprint and AT&T. Unlike T-Mobile who has already started selling the second generation phablet, it is only up for pre-order through the big red carrier.

What sets the 4G LTE version in question apart from those available through other service providers is the home button which has been branded with the Verizon logo. The front panel of the Galaxy Note 2 houses a 5.5-inch HD Super AMOLED touchscreen of 16:9 aspect ratio as well as a 1.9MP webcam to facilitate video conferencing over the web. The flip side sports an 8MP snapper with features like LED flash and auto focus amongst others. 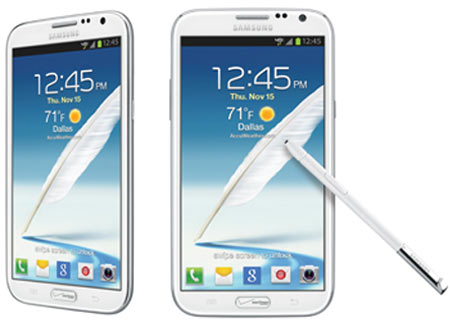 Moreover, the Samsung slab drenched in shades of titanium grey and marble white, binges on the latest Android Jelly Bean platform. Packaged along with the S Pen, the smartphone comes with the handwriting-to-text function and other attributes like AirView and Easy Clip. While the 1.6GHz quad core Samsung Exynos processor extends support to multiple applications at the same time, the Multi Window view allows users to run two apps on the screen. It ships with 2GB of RAM as well as 16GB of onboard memory and is pre-loaded with productivity tools like Polaris Office.

The Samsung Galaxy Note 2 can now be pre-ordered from Verizon Wireless retail stores and the official website for $299.99. It requires a two-year customer agreement along with a data plan and is slated to start shipping in the coming weeks.