Rumor after rumor and leak after leak has spoken about the Nokia Lumia 929 or the Lumia Icon, and it seems we’re finally ready to see the product in its full form. That’s because a few hours ago, Verizon had sneakily put up a test page for the handset on its official site, confirming that it will indeed kick in a whopping 20MP PureView camera.

The page in question was spotted by Engadget, but it has since been taken down. It is expected to be back up immediately after Nokia announces the handset at the ongoing CES 2014 event. And that’s where more details about the Nokia Lumia Icon will be confirmed. The device which has been churning rumor mills since last summer is finally ready to be unveiled now. 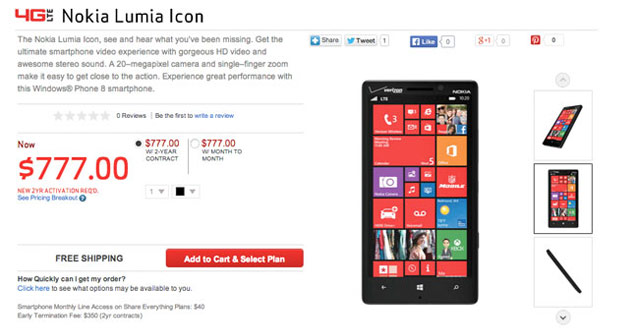 Also known as the Lumia 929, it was placed on the Verizon website tagged with a placeholder price tag of $777 which is in no way indicative of its final cost. Like we said, the handset grabs hold of a 20MP PureView camera. The website has also revealed that a 2,420mAh battery will form part of its offerings, apart from support for wireless charging.

Equipped with a 2.2GHz quad core processor, the Nokia Lumia Icon will feature a 5-inch 1080p screen, and will of course run the Windows Phone 8 OS. We know from prior leaks that 2GB worth of RAM and 32GB worth of internal storage (sans any expansion facility) will also be doled out with the Nokia smartphone.

Look forward to news about the Nokia Lumia 929 or the Lumia Icon which should be unveiled soon at the CES.