The Motorola Droid Maxx has hit Verizon Wireless in the US and the service provider has revealed that the device is now up for pre-order through the official website for a price of just under $300 with a two-year contract. Apart from this, the big red carrier has introduced two more Motorola Droid smartphones dubbed Mini and Ultra which are pegged at at $99.99 and $199.99, respectively. All three smartphones are slated to be shipped to interested customers before the end of the next month.

Outfitted with a 5-inch HD touchscreen, the Droid Maxx is enclosed in a chassis measuring 5.41 x 2.80 x 0.34 inches which tips the scales at 5.86oz. Its 10MP rear-facing camera claims to be capable of capturing 1080p videos at the rate of 60 frames per second, while the front-mounted 2MP snapper can be employed for the purpose of making face-to-face conference calls over the web. Additionally, this Global Ready phone takes advantage of Android’s Jelly Bean 4.2 platform. 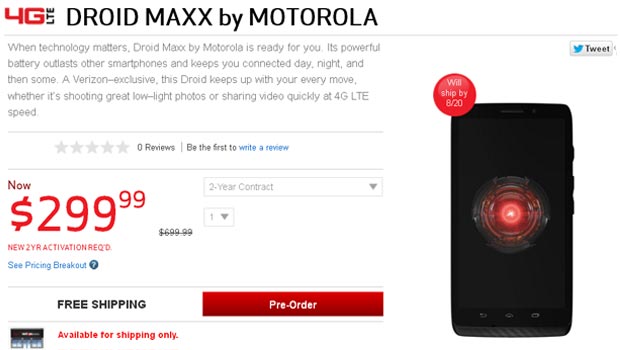 The internal working of the Droid Maxx is carried out under the supervision of a dual core processor running at a speed of 1.7GHz that works in tandem with a quad core GPU. 2 gigabytes of system memory has also been thrown into the mix along with 32GB of internal storage which is not entirely available for users.

It goes without saying that this Droid has been loaded with most of the common attributes like Bluetooth, Wi-Fi, GPS, Google mobile services and more. The smartphone hides a 3500mAh lithium-ion battery under the hood which is said to be capable of providing usage time of close to 48 hours on a single charge. Its standby time is of about 25 days.