Motorola’s big Chicago event has officially introduced the new Moto Z3 and 5G Moto Mod to the world. The handset is actually very similar to the Moto Z3 Play in terms of looks, but it’s got a different processor and photography setup.

Strangely enough, Motorola has chosen to equip its flagship phone with last year’s flagship chipset – the Snapdragon 835. This might be some kind of cost-cutting measure since the device will sell for $480 (roughly Rs 33000) full retail or $20 in 24 monthly installments via Verizon. Another potential drawback is the lack of a 3.5mm headphone jack.

The big highlight of the Moto Z3 is that it’s the world’s first 5G-upgradable phone. Once Verizon rolls out its 5G network sometime next year, owners will be able to buy the 5G Moto Mod containing Qualcomm’s X50 modem and upgrade to the faster network. The accessory comes with a 2000mAh battery pack as well.

While this sounds good in theory, it might be easier to simply buy a 5G-ready phone in 2019 rather than attach a Moto Mod to get the benefits of faster speed. For those not willing to wait, the Moto Z3 does have some interesting features to appeal to buyers.

For one thing, it has a large 6-inch FHD+ Super AMOLED display with an 18:9 aspect ratio. Motorola has also introduced iPhone X-like gestures as an alternative to Android’s default buttons. Users can switch on “one button nav” to introduce a bar at the bottom of their screen which they can use to navigate to the home screen or swipe left/right to access recent apps. 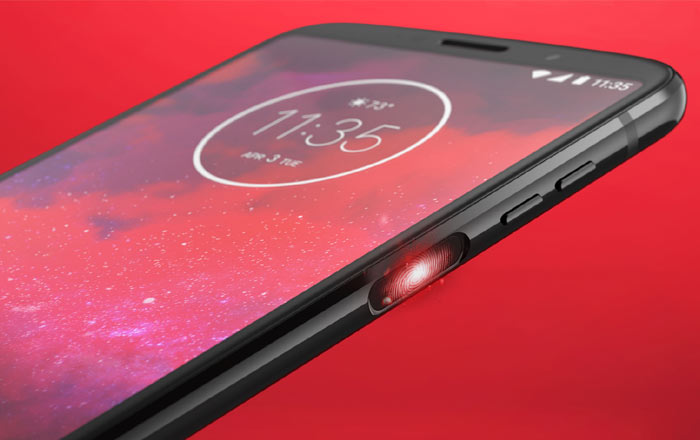 Unusually, Motorola has decided to place the fingerprint scanner on the right-hand side of the device. Not everyone likes having the reader pushed to the side instead of at the front or back, so this might be a tough sell for some. There is an alternative option for them in the form of facial recognition, though it might not be as secure as the one found in the iPhone X.

Specifications of the Moto Z3:

The Moto Z3 will go up for sale via Verizon on August 16. The 5G Moto Mod doesn’t have a price tag yet, but it will be coming to the US in early 2019.