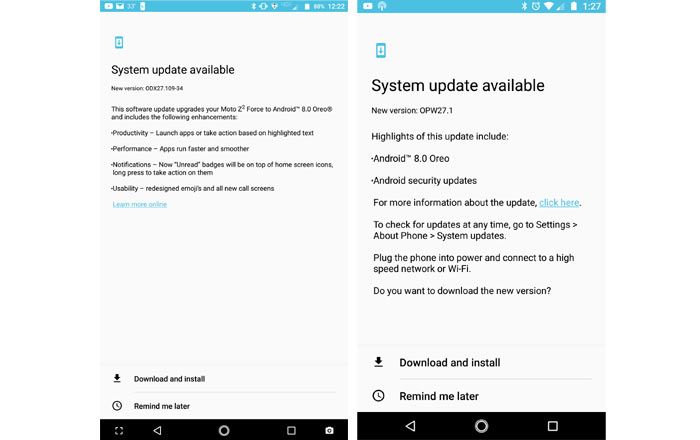 Motorola’s got a double treat for Moto Z2 Force and Moto X4 users in the US as it’s begun rolling out the Android 8.0 Oreo update for the pair. The upgrades are rolling out slowly at the moment for specific variants of the devices, so it might take a while before everyone gets it.

Reddit was the first to break the news of the Verizon Moto Z2 Force getting Oreo. The carrier itself hasn’t mentioned the promotion on its website, but the screenshot above confirms that the rollout is in full swing. It’s set to arrive in the form of software version ODX27.109-34 to units, so keep a lookout for that.

Other than the main benefit of having access to the latest Google has to offer, the Moto Z2 Force is also set to get smaller enhancements like redesigned emoji and revamped call screens. Apps are getting updated with a new ‘Unread’ badge which will be on top of home screen icons. Owners can long press on the application to respond.

Motorola’s also included some neat productivity changes like allowing users to kickstart apps or perform some other action based on highlighted text. The company further claims applications will run faster and smoother now. The Reddit thread notes that T-Mobile is currently testing the Android 8.0 update, so that should come out soon.

As for the Moto X4, only the Android One version is getting a taste of Oreo right now. Google’s Project Fi confirmed that the update will be released in batches, just in time to fulfill its end-of-the-year upgrade promise. The promotion comes with the build number OPW27.1 and includes the latest Android security patch.