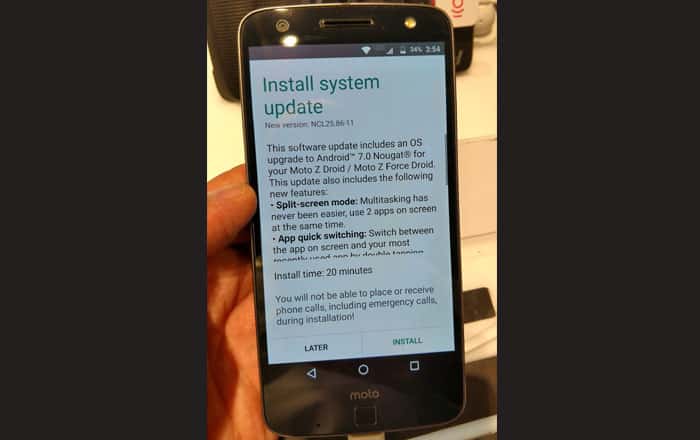 Motorola appears to have begun beaming out Android 7.0 for the Moto Z Droid and Moto Z Force Droid in the US. Many users on Reddit are reporting that their handsets are receiving the promotion to Nougat.

To recall, the Moto Z Droid and Moto Z Force Droid are being sold exclusively with Verizon contracts in the US. The carrier hasn’t said anything official about the Nougat rollout yet. Owners of either handset can manually check for the upgrade by heading to Settings, followed by System updates, and finally Check for system update.

The OTA upgrade is called NCL25.86-11 for the Moto Z Droid and NCL26.86-11 for the Moto Z Force Droid. It weighs in at a pretty heavy 1500MB and is supposed to take up to 20 minutes to install. Motorola warns that people won’t be able to place or receive phone calls during the transition process.

Also Read: Lenovo to use Moto branding for all future phones

Once it’s set up, they’ll be able to access Nougat features like support for Google’s Daydream VR and quick app switching. The latter lets consumers toggle between their most recently used apps by double tapping Overview (Recent Apps). The OS also brings tools like split-screen mode and quick settings customizations.

This notably marks the first Android 7.0 rollout for Motorola customers in the US. Indian users of the Moto G4 and Moto G4 Plus began getting the send-up to Nougat last month. The brand has already announced the list of phones which are going to get the upgrade, so more of its phones should follow suit.