Moto X fans have got three more days to decide if they want a good deal on the smartphone customized using Moto Maker. Verizon has actually slashed $50 off the price of the Motorola handset on a two-year contract.

What’s more, since the phone is now pegged at $99.99 for its 16GB capacity, you’d only be paying $49.99 for it. This comes just a couple of days after the carrier was seen dropping the LG G2’s cost to a tempting $0 on a two-year customer agreement. 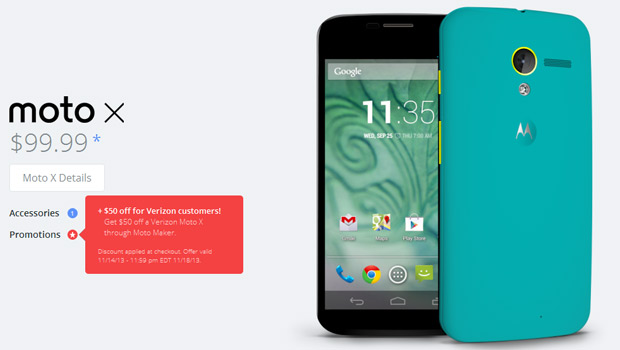 Android Central notes that there’s no need to apply any special promotion code in order to avail of the discount. The $50 drop will automatically be taken care of when users check out their customized Moto X. But you’ll need to hurry since the offer is only open until 11.59 pm EDT on November 18, 2013.

Here’s a quick run of the smartphone’s main specs:

The customized Moto X should reach buyers within four days after they place their order. We’re still to hear word on the custom engraving and wooden back panel options though.