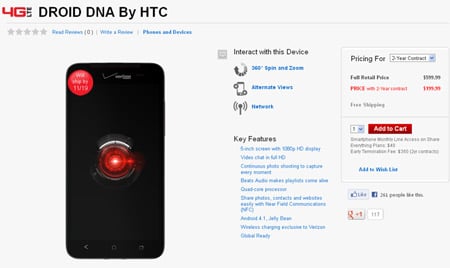 The HTC Droid DNA smartphone’s price and release date were announced by Verizon at the event held on November 13 and it has already hit pre-order status in the US. The device will exclusively be available from this service provider from November 21.

The ‘ultimate smartphone’ is outfitted with a 5-inch true HD 1080p super LCD 3 touchscreen with pixel density of 440ppi. It is even reinforced with a Corning Gorilla Glass 2 coating in order to withstand scrapes and scratches. It measures merely 5.55 x 2.78 x 0.38 inches and tips the scales at 5oz. The phone is based on the Android Jelly Bean 4.1.1 platform which tags along a number of Google mobile services and enhanced features such as Google Now, improved Voice Search, Speech-to-text and more. 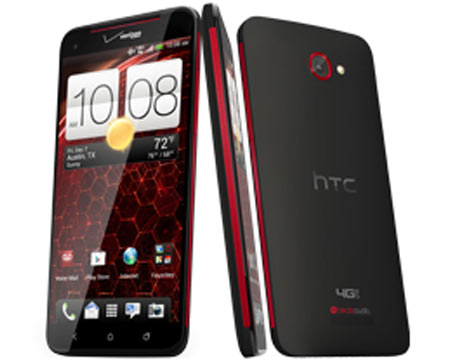 Resting snugly under the hood is a high-performance GPU and a quad core Qualcomm Snapdragon S4 Pro chipset that clocks in a speed of 1.5GHz. There’s 2GB of RAM for smooth multitasking and navigation as well as HTC Sense 4+ for a user-friendly and intuitive interface. Furthermore, the device’s front panel sports a 2.1MP ultra-wide angle webcam with Auto Portrait and the ability to capture 1080p high definition videos.

Muck like a number of other HTC phones, it has been blessed with an advanced 8MP rear snapper which boasts of a f/2.0 28mm wide-angle lens, a BSI sensor, automatic flash, auto focus, continuous shooting and HTC VideoPic to click images while recording videos. Besides Beats Audio for studio-quality sound, the Droid DNA is integrated with a 2.55 volt headset amplifier and a dedicated amp to keep users entertained on the move.

The Global Ready handset has been deployed with NFC, Bluetooth 4.0 and Wi-Fi, while it can even act as a mobile hotspot to share its 4G LTE network speed with as many as 10 compatible devices. It ships with 16GB internal memory and draws power from a non-removable 2020mAh lithium-ion battery that can cough up the juice for usage time of 12.8 hours on a single charge.

The HTC Droid DNA will hit Verizon store shelves on November 21 for $199.99. It requires a two-year customer agreement and qualifying data plans. The phone may start shipping on November 19. 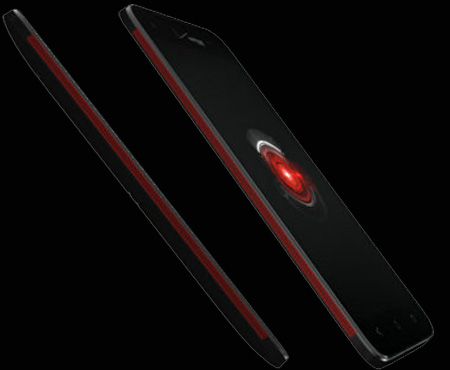