Verizon Galaxy Nexus tagged at under $100 on Amazon 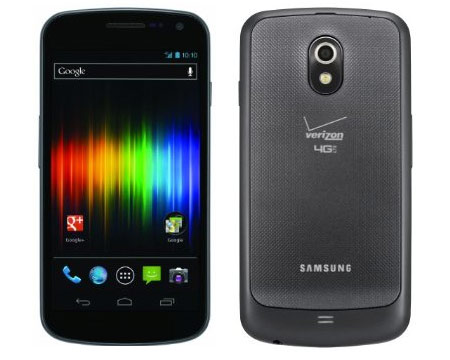 The Verizon Galaxy Nexus is now selling at a price of $99.99 on Amazon. Folks who have been looking for ‘reasonable’ excuses to grab a bite of Ice Cream Sandwich may probably find this deal hard to resist.

The seamless amalgamation of hardware and software aims to bring an enhanced mobile experience to Galaxy Nexus users. It dons a 4.65-inch HD Super AMOLED contour display offering resolutions of 1280 x 720p. This 4G LTE powered phone brings in speed besides serving as a mobile hotspot for up to 10 Wi-Fi enabled handsets. Under the hood, a 1.2GHz dual core processor can be found and this comes backed by 1GB RAM.

As for the snappers, this NFC enabled device has a 5MP primary camera and a 3MP front-facing one. The former inclusion is complete with AF, LED flash and 1080p video recording capabilities. These images and videos along with other content can be hoarded on the handset’s 32GB memory. Thanks to Ice Cream Sandwich, features such as Face Unlock, Android Beam and quick multitasking can be indulged in by users on the move. 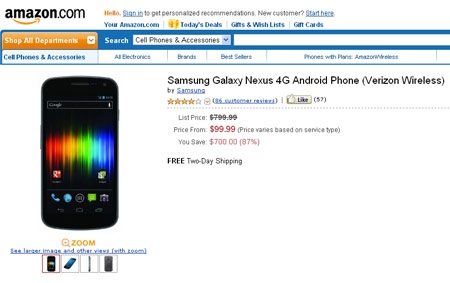 Needless to say, potential owners will also have Google services such as the integration of Google+ and access to the Android Market at their disposal. Coming back to the device’s $99.99 price tag on Amazon, it essentially means a $200 drop for the Samsung Galaxy phone which is now selling on Verizon at $299. Dug up by Android Central, the smartphone coming through Amazon, will require potential users to enter into a new two-year contract.

As mentioned earlier, the Verizon Galaxy Nexus price detail spells out to be $99.99 on Amazon.