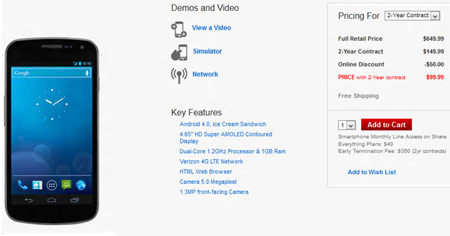 While Google continues to retail the HSPA+ version of the latest Nexus smartphone for $349, the Verizon Galaxy Nexus price has witnessed a steep drop, bringing the on-contract rate to just $99.99. That’s a sudden decline of $200 from the original pricing announced back in December of last year.

The guys over at Droid Life speculate that the carrier might have a new device on its way. And the possibility of that happening is quite high now that the Note II is in the rumor spotlight and Samsung even plans on unveiling yet another Galaxy member this August. At the same time, Verizon’s decision to slash off $200 could just be a feasible way of increasing sales.

The Galaxy S3 has been retailing like hot cakes since its launch and its holds a $199.99 price tag through the carrier. So offering the Galaxy Nexus at a discounted rate should boost its demand. Amazon has already been selling this version of the smartphones for the same price ($99.99) since the end of January 2012. The handset is said to be one of the few 4G LTE smartphones on Verizon to come with the Android Ice Cream Sandwich OS right out of the box.

For a refresher on the specifications, the device is fitted with a 1.2GHz dual core processor backed by 1GB of RAM. Users have approximately 32GB of built-in hoarding capacity and there’s a 4.65-inch 1280 x 720p HD Super AMOLED display sitting pretty on the front. The handset is built around dimensions of 5.33 x 2.67 x 0.37 inches and packs in a 1,850mAh battery capable of delivering up to 12 hours of talktime or 150 hours of standby, amongst others. 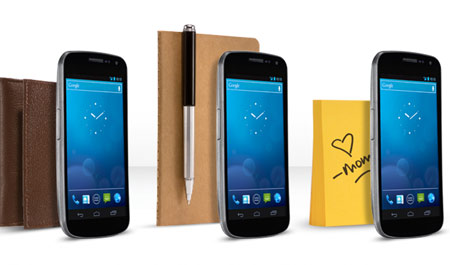 As stated earlier, the Verizon Galaxy Nexus price now amounts to $99.99 with a 2-year service agreement.