Just last week we reported that Verizon plans to release the LG G Pad 8.3 LTE and the Samsung Galaxy Note Pro 12.1 on its network on March 6. The carrier has, however, only confirmed the launch details for the former tablet. The company has priced the slate at $299.99 which is sans any contract agreement.

The LG G Pad 8.3 has been well received. The device is the company’s second attempt in the tablet category after it launched its first slate, the Optimus Pad, back in 2011. It has also been given the Google Play Edition treatment where it is available directly from the Play store with pure Android onboard. The model reaching Verizon will have 4G LTE connectivity. 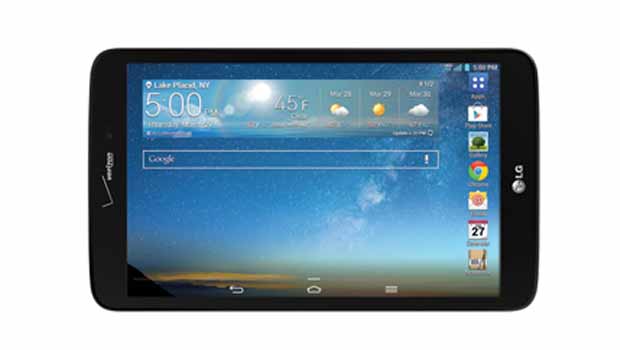 While cellular connectivity is only for data access, users will still be able to send and receive text messages from the slate through the Verizon Messages application. Additionally, the LG G Pad 8.3 comes with the Q Pair tool that allows you to sync data from an Android phone to the slate via Bluetooth to stay updated with alerts from social networks and receive notifications of messages as well as calls.

The LG G Pad 8.3 runs on Android 4.2 Jelly Bean and it tags along features such as Slide Aside, QSlide, Quick Memo and many more. What’s interesting here is that the slate is said to have a 1.5GHz quad core processor, while the Wi-Fi only model sports a 1.7GHz chipset. The lower clock speed is likely to be a mistake.

The LG G Pad 8.3 will go on sale via Verizon’s online and retail stores starting tomorrow. You can also pick up the slate with a 2-year contract for $99.99 until March 10, after which the price will be increased to $199.99.