Verizon has introduced the Droid Ultra along with 2 other smartphones in this particular Android series and it has even disclosed a price. It’s finally good to hear that Motorola has cooked up a new Droid lineup, but there’s still one more treat from the American company that we’re longing to see. It’s the Moto X phone which should go official next month carrying similar specifications as the device in question.

The Droid Ultra is apparently the successor to the Razr HD smartphone and it feature the same rugged form factor, but with a more stylish appearance which comes at a price. The device has a textured rear panel and comes in color options of black and red. The overall form factor is crafted from DuPont Kevlar for ruggedness, while the front flaunts a 5-inch HD AMOLED touchscreen that features Active Display technology which allows users to carry out various operations like place calls, check notifications, play music, get directions and even send text messages amongst others, without the need of touching the phone. 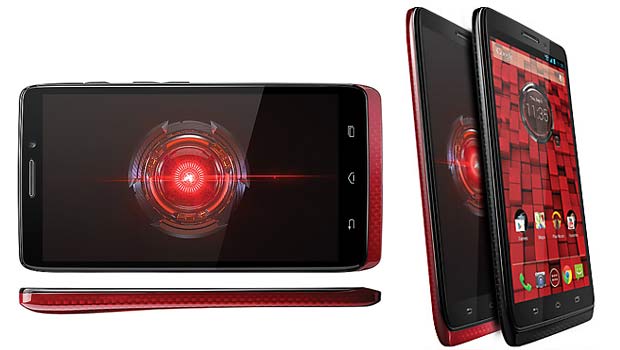 Additionally, the device can even be woken up by saying ‘Ok Google Now.’ These attributes are made possible though the company’s own X8 Mobile Computing System. The SOC here is designed in conjunction with Qualcomm and it houses 8 cores, 2 Krait processors at 1.7GHz, 4 GPU modules at 400MHz and 2 for voice commands. In other words, the insides sport a modified Snapdragon S4 Pro AP. Measuring 7.18mm thin, it packs in 2GB of RAM, 16GB of storage, a 2MP FHD webcam and a 10MP rear Clear Pixel snapper. Lastly, the chassis houses a 2130mAh battery which can deliver around 28 hours of usage.

The Droid Ultra is currently available for pre-order through the carrier’s website for a price of $199.99 with a new 2-year agreement or $599.99 on a month-to-month subscription. Additionally, the company is offering the smartphone in a bundle package which includes a black high gloss silicone case, 3 screen protectors and a vehicle charger for $249.99 or $649.99.