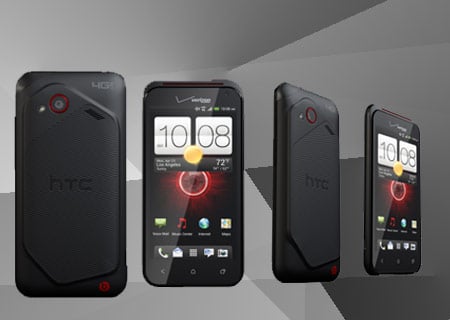 The new kid on the block is the HTC-made Verizon Droid Incredible 4G LTE smartphone. Unveiled at the International CTIA Wireless 2012, the device will take its place as the twenty-third installment to surf on the carrier’s LTE network.

With data rates of 5Mbps to 12Mbps for downloads and 2Mbps to 5Mbps for uploads based on an average, users will be able to share their internet connection with others through the Mobile Hotspot attribute. This can be done with up to 10 Wi-Fi enabled devices. The Beats Audio enhancement is aimed towards delivering rich sound experiences, while the internal storage can be expanded up to a total of 32GB via a microSD memory card. The handset is expected to come bearing a host of features such as HTC Video Pic, the NFC-powered Android Beam and much more with the Android 4.0 OS as well as the HTC Sense 4.0 UI.

Where specifications are concerned, the handset flaunts a qHD Super LCD touchscreen which stretches up to 4 inches diagonally, on its front. The rear side is donned with an 8MP camera that sports autofocus and LED flash with a 28mm BSI f/2.2 lens. HTC has also thrown in a front-facing snapper for video calling and chatting purposes. Powering the device is a dual core Qualcomm Snapdragon S4 processor that clocks in a frequency of 1.2GHz. These aforementioned components are complemented by the 1,700mAh Li-ion battery.

The Verizon Droid Incredible 4G LTE price details aren’t disclosed as of now. The handset is anticipated to be available through Verizon Wireless Communications Stores and online.