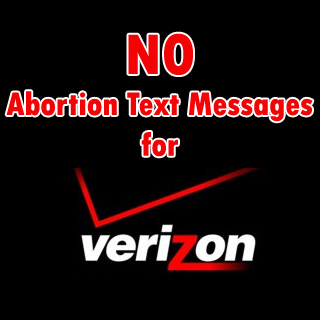 On Wednesday, Verizon Wireless made known that it had downright refused a request made by Naral Pro-Choice America, a Washington, D.C., abortion rights group, to make use of the company’s mobile network for a sign-up text messaging program. What’s even more important to note is that whilst other major wireless carriers have accepted Naral’s request to use their networks, Verizon has taken a stand and declined it.

Naral Pro-Choice America’s program allows people to sign up to receive its text messages by entering in a message to a five-digit number. Termed as “short codes,” in today’s day and age the five-digit numbers have become a popular and convenient way to get updates on any and every type of news.

Speaking on as to why exactly the request was rejected, Jeffrey Nelson, a spokesman for Verizon stated that the company’s code of conduct forbids the topic of abortion from mass distribution.

However, Nelson did give a light hint on the possibility of the policy to change, as Verizon’s code of content “was initially developed at a time before text-messaging became a mass-market phenomenon.”

“We have been reviewing that code for the last couple of months as text messaging and other multimedia services have become much more mainstream in American communications,” he continued.

Whilst speaking to NYT, who first reported the news, Nancy Keenan, Naral’s president that Verizon’s decision interfered with political speech and activism.

“No company should be allowed to censor the message we want to send to people who have asked us to send it to them,” Keenan said. “Regardless of people’s political views, Verizon customers should decide what action to take on their phones. Why does Verizon get to make that choice for them?”

For a fact, such text messaging is an important new way of awareness for advocacy organizations looking to educate and alert their members. And Verizon’s decision to block this new form of effective political tool comes in the way of its users’ right to get information that they choose to receive.