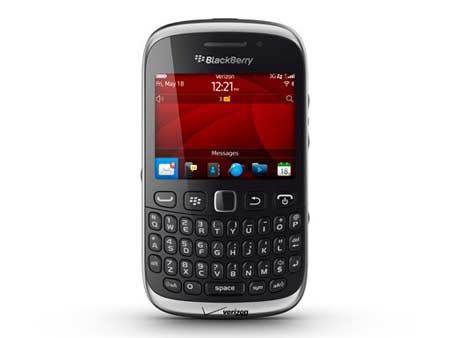 The new Verizon BlackBerry Curve 9310 which works towards keeping users connected, has set foot in the US. The device is easy to use and appears to be a good option for first-time smartphone users.

This slim phone has been deployed with the BlackBerry messaging service as well as other social-centric attributes, allowing users to keep in touch with friends and family at all times. It sticks to the company’s proprietary form factor complete with a physical QWERTY keyboard that has been embedded with a dedicated BBM key.

The handset gives BlackBerry 10 a miss and runs the BlackBerry 7.1 platform. Similar to most other RIM devices, it comes pre-installed with applications like Facebook and Twitter. In addition to this, the smartphone features the Social Feeds 2.0 app, which is capable of updating multiple social networks simultaneously and offers a consolidated view for various news sources, social or instant messaging applications and RSS feeds amongst others.

As far as the specifications are concerned, the Curve phone embeds a 3.2MP primary camera possessing video recording capabilities. It also has an expansion slot to increase the memory by up to 32GB with the assistance of a microSD card. Moreover, it is complete with VZ Navigator and on-device parental controls to determine access to various messaging and social networking services and even create a contact list for incoming and outgoing calls.

The Verizon BlackBerry Curve 9310 price and release date stand at $49.99 after a $50 mail-in rebate and July 12, respectively. We’re only talking about it’s online release here and its availability through Verizon retail stores is set for the coming weeks. The device requires customers to sign on the dotted line for a two-year agreement and a Share Everything plan that starts at $80 per month.