The HTC One Max that recently went official is once again in the spotlight, and the topic of discussion this time around is the availability information of the phone. A couple of press renders of the handset have been doing the rounds on the web with AT&T and Verizon branding, suggesting that both carriers will be selling it in the US.

As you may have guessed by now, the pictures of the HTC One Max have been leaked by none other than @evleaks. One of the renders shows the device with the AT&T logo, while the other proudly flaunts its Verizon Wireless branding. And if the dates on the pictures are anything to go by, then the carriers will be releasing the device in the first week of November itself. 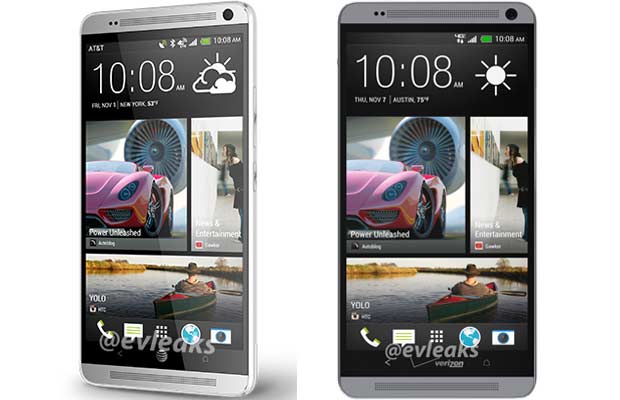 For refresher’s sake, let’s take a quick look at the phone’s specifications. It comes encased in a chassis with dimensions of 64.5 x 82.5 x 10.29 millimeters and houses a 5.9-inch full HD 1080p touchscreen on the front panel. An UltraPixel camera as well as a 2.1MP webcam allow the device to capture high-resolution images or videos and make conference calls.

A quad core Qualcomm Snapdragon 600 processor sprinting at 1.7GHz handles the internal working of the One Max and seeks assistance from 2GB of RAM. It binges on Jelly Bean garnished with the latest version of Sense and offers either 16GB or 32GB onboard memory expandable up to 64GB. The device is powered by a 3300mAh lithium-polymer battery.

Verizon Wireless and AT&T have not revealed anything about the HTC One Max as yet, but we are expecting an announcement very soon.