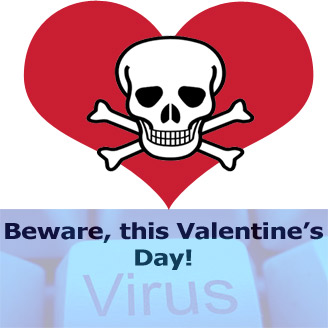 The count down has begun for Valentine’s Day, and amidst the real love there have been several reports of ‘loved up’ worms doing the rounds on the Internet since January 2008. In fact, anti-virus authorities in China have already warned PC users to be aware of such viruses.

But, this is not the only worm that is trying to get into your life this Valentine’s Day. According to experts, there are other viruses such as “Worm-blebla.B” and “VBS-ILoveyou” which could possibly attack computers if unsuspecting users open emails or even attachments which have been disguised as Valentine’s Day messages.

Basically, computer users have been warned not to open any unidentified emails, especially those which are attached with Spanish characters.

Computer users should also update their anti-virus software and use the real-time computer virus monitoring function while surfing the Internet.

Experts are also advising computer users to remember not to click on bogus discount messages from online stores, which could also be used to spread the virus.