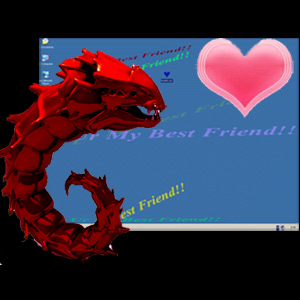 Valentine’s Day is soon approaching, and malware writers all over the world are using this opportunity to spread the bad word. Panda Security has announced that PandaLabs has detected two new worms which use the topic of Valentine’s Day to spread.

The newly discovered worms are called Nuwar.OL and Valentine.E. In fact, earlier this month, we had reported about the return of the Storm Worm just in time for Valentine’s Day.

According to Luis Corrons, Technical Director of PandaLabs, “Year after year we see the appearance of several malware strains that use Valentine’s Day as bait to attract users. This indicates that cyber-crooks are still reaping the benefits of this technique and many people still fall into the trap.”

The first worm Nuwar.OL reaches computers via email accompanied by subjects like “I Love You So Much,” “Inside My Heart” or “You In My Dreams.” The text of this mail includes a website link that downloads the malicious code.

The web site is very simple and looks a lot like a typical mushy Valentine’s Day card complete with a large pink heart. Once it has infected a computer, the worm sends out a large amount of emails to the infected user’s contacts, in order to spread. This tends to create a very heavy load on networks, slowing down the computer.

The second worm lurking around is called Valentin.E and much like the first worm it too spreads with subjects such as “Searching for True Love” or “True Love” teamed with an attached file called “friends4u”. Now, if the user happens to open this file, a copy of the worm will be downloaded, after which the malicious code installs of the computer as a file with the .scr extension.

If the unsuspecting user does run this, Valentin.E shows a new desktop background, tricking the user, and keeping him or her occupied, while the sneaky worm makes several copies of itself on the computer. Finally, the worm sends out emails with copies of itself from the infected computer, further spreading and infecting more users.

To avoid getting duped by these deceiving mails, Panda Security has offered the following tips: