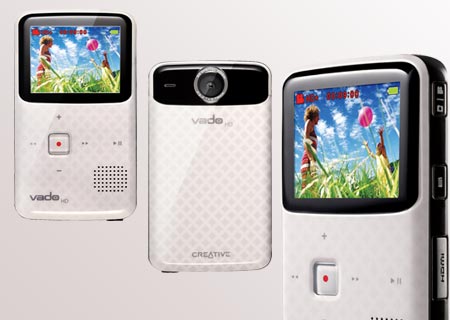 Leaping into the next generation, Creative maintains its stand of pulling out HD quality videos right from pockets with its Vado pocket camcorders. After the matte black Vado HD that mesmerized many, Creative has trod its way far ahead. Stepping in with the third generation Creative Vado HD pocket camcorder, the company has bundled two acclaimed aspects, HD quality and touch ability, into a single package. To know whether the camcorder is ‘pocket-friendly’ in every aspect, read on our in-depth review that unfolds its attributes one by one.

Staying true to its name, the device is highly portable and easily slips into pockets. Well, if you thought that Creative did a good job by smoothly integrating the buttons within the previous generation device, think again. It has outdone itself this time as the buttons (surface) are now touch sensitive which means it takes a mere simple touch to execute a command. The company has evidently worked on its appearance as the device emerges with sleek, stylish looks.

The trendy Creative Vado HD Third Generation is drenched in a white hue complete with a gray criss-cross pattern adorning the front and rear of the camcorder. You could also opt for the demonish black unit with grey patterns. The pint-sized device can be picked in Red, Purple and Cyan hues as well. Surrounding the display is a thick black frame which aids in providing a more isolated appearance while viewing content. The sides are laced with a thick black strip without the slim silver line found along its predecessor.

Further, seen running along the top of the latest Vado is the power button and the multi-function 3.5mm jack which can be used as headphone jack, standard TV out and to connect stereo microphone. Along the side are neatly placed dedicated switch to easily toggle between camera and camcorder modes. It also embeds a dedicated delete button and an HDMI slot to connect the device to an HDTV. A tripod mount and USB connector are aptly located at its base. The USB connector found in the earlier model had to be pried out while here all it needs is just a simple press to unleash the connector.

The front face adorns the 2-inch LCD display with 640 x 240 pixels. Well, not much has changed with the display compared to the previous model. This bit could have been enhanced by Creative with a larger display. On the front side, the Creative Vado HD exhibits a physical recording button at the centre alongside the touch surface marked with + and – signs to zoom in and out while capturing footage, or adjusting the volume while viewing. The device also shows off rewind and forward touch buttons, aligning the play/pause button. The touch interface is extremely sensitive and we often touched the controls accidentally when holding the device or even recording. Connecting it to the HDTV was simple and the quality was maintained as well.

This iteration captures videos at 720p with 2x digital zoom. So, here again, nothing much has changed as it does not support 1080p. Even while shooting videos we didn’t notice any significant changes that could evidently distinguish the recording quality from its predecessor. In bright light, the videos seemed quite good, of course not remarkable as we would expect from the generation leap. Well, using the device with the 2x digital zoom didn’t manage to impress us. Moving to still images, they were satisfactory. The lack of flash was evident while taking images in low light.

The 4GB of storage space allows up to two hours of recording but those who jump onto a clicking spree would notice the absence of a memory slot. The device does not come with the ability to extend storage space. It is bundled with a rechargeable battery and software that enables video editing and seamless uploading to YouTube, Photo Bucket, KinKast and Facebook. The bundle is inclusive of the Vado HD (3rd Gen), rechargeable li-Ion battery, HDMI cable, USB extension cable and quick start guide.

Weighing the pros and cons, the Creative Vado HD (Third Generation) seems a decent pocket HD camcorder. However, its outrageous price tag of Rs. 14, 990 comes across unjustified. Before zeroing on this one, you could peep into several other offerings available in the market that could suit your pocket and in turn offer better performance. The third generation of Vado HD has managed to gain a rating of 7 on 10 from us.