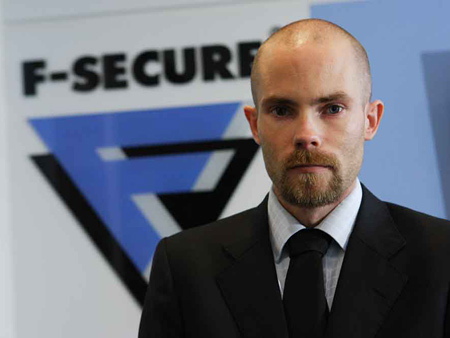 Mobile phones – the boon of the 20th century have certainly made the world smaller and closer. Today handsets have literally advanced themselves as mini computers and can practically perform any and every function that a PC can. But with the boon, there are several banes attached too. Ironically, mobile phones are not alien to malwares and virus attacks any longer.

Can you please tell us a little about yourself, your educational and professional background.

I graduated in June 1995, in economics and started working in sales/tech-support for an F-Secure reseller in Sweden which opened up my eyes to F-Secure. In 1999 I joined F-Secure Sweden and developed our first automatic update tool. Two years later I developed the F-Secure Virus Statistics system. Around the same time I started working with the Security Lab.

Virus threats grew when computers got more sophisticated. Is the mobile phone going through a similar threat in terms of security?

Yes, we need to take the threat seriously now while there’s still time to do something about it. Mobile phones are really miniature PCs and can install 3rd party applications and stay online all the time which are really the pre-requisites for a malware outbreak.

Fortunately the operating system manufacturers, mobile operators and security vendors are all working together in an effort to make sure that when the problems really start we’re prepared for it.

The mobile phone today has gone beyond a calling and texting device. It has emerged as a multimedia device. However as more features are being incorporated, the amount of security threats also seem to be augmenting. What do you think is the reason behind this?

It’s a natural evolution. Things are getting more complex and at the same time more powerful too when it comes to good features and applications but unfortunately are also getting prone to bad applications.

What are the changing trends that you have noted in the burgeoning of mobile security vulnerabilities.

One of the things that stands out is that everything is happening much faster. In around three and a half years, we’ve had mobile viruses. We already have mobile spyware which took over 10 years on the PC. So the threat is evolving faster in comparison to the PC.

In addition, user-awareness about threats on mobile devices is unfortunately very low. Most users think that mobile devices are about fun and games or for the corporate user all about work. But the far majority of these users don’t know that there are malware out there that steal your data or destroy your phone, removing all significant information.

So far about 99% of the 401 mobile viruses we’ve seen are targeting the Symbian S60 platform. This is not only because it’s the market leader worldwide but also because there is source-code available for malware to this platform available on the Internet.

Can you please explain the nature of the most common and frequently seen security threats to the mobile phone users these days?

The ones we get most reports about are Cabir and Commwarrior. Cabir spreads through Bluetooth but doesn’t have any harmful effects on the mobile phone. It does drain your battery very quickly though, typically in 30-60 minutes.

Commwarrior spreads using Bluetooth and also uses MMS to spread to contacts in your address book. When it does that it can take texts from existing messages in your unbox which means it can potentially disclose confidential information.

So what exactly happens when a mobile device gets struck by a virus or malware?

It can just spread, can disclose information and can destroy data and the content of the phone, to the point where you have to fully restore it. There are also mobile spyware that can steal your information such as text messages, emails, can remotely activate the microphone and track your location.

When a particular mobile phone gets infected, does it pose a threat to the entire network that they are connected to?

Not specifically to the same network but there have been cases where a single phone infected by Commwarrior, sent over 3500 messages. Another report says that 8000 infected phones sent over 450,000 messages in total.

Which Smartphone operating systems are by default more secure than others and which ones are less secure?

Right now, the three biggest operating systems (Symbian, Windows Mobile and RIM) are all very secure. The new version of Symbian, Symbian S60 3rd Edition, was modified in such a way that it made the existing malware extinct. Only the latest spyware versions work on this platform. The same spyware works on Windows Mobile and Blackberry as well.

Which is the biggest threat to security on a smartphone? Is it Bluetooth, email attachments, WiFi? Or is it from installing unsigned and untrusted software?

It’s definitely installing unsigned and untrusted software. All the malware we’ve seen up until now (with the exception of one spyware application) are unsigned and considered untrusted by the operating system. They therefore require the user to install them but they do that by using different social engineering tricks such as distributing it as a useful tool, a game or similar applications and thereby tricking the user into installing the application.

Can you tell us about a few mobile security products from F-Secure that deal with each of the above mentioned issues?

F-Secure provides both anti-malware and firewall solutions for the Symbian platform and anti-malware for the Windows Mobile platform. Both solutions have been designed to be as easy and automatic as possible. All updates are automatic without any user action, it automatically scans for all potentially malicious files and only alerts the user if something is found.

Can you tell our readers a few tips or methods of authentication that can be followed in order to protect the mobile devices and networks from getting effected?

Only install signed applications. More importantly, don’t install anything you are unaware of and comes from an untrusted source. Another good tip is to make sure your Bluetooth is in hidden mode. Then it won’t be visible to any mobile malware. Last, treat your mobile device is due to the miniature PC it really is. This means that any security solutions that you have on your laptops should also be active on the mobile device, especially in a corporate environment.