US Monkey’s Brain Signals and Thoughts propel Robot in Japan 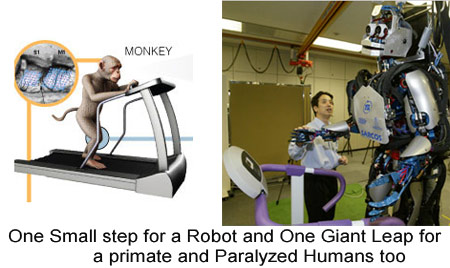 Researchers in Japan and the US have reportedly proved that monkeys can utilize their brain to control the walking function in robots. You will find this experiment to be rather innovative once you read further. Moreover, this move could also help paralyzed people to walk again.

As a monkey named Idoya walked in North Carolina in the US, its brain activity controlled a robot far away in Japan! Scientists at the Duke University Medical Center used a 12-pound, 32-inch monkey’s brainpower activity to run a 90kg humanoid robot via the Internet.

This achievement was really remarkable more so because the monkey was located in the US, while the robot was in Japan. The two treadmills were not connected.

The Duke scientists were working with the Computational Brain Project of the Japan Science and Technology Agency. Together they hooked up a rhesus monkey with electrodes that obtained their signals from her (the monkey) brain’s motor and sensory cortex cells while she walked on the treadmill.

The electrodes recorded the cells’ responses when the monkey moved on the treadmill at different speeds. Simultaneously, sensors on Idoya’s legs kept track of their patterns of movement.

This information was sent in almost immediately from the North Carolina lab to keep control of the commands of the five-foot-tall robot in Kyoto, Japan.

Interestingly, according to Miguel Nicolelis, lead research on the project, the video of the corresponding robot was also being watched by the monkey, and Idoya was clearly very amused to see the robot imitating its movements.

“As he changed his speed of pattern, he was watching the robot change as well. She was pretty happy, yeah. Plus, she was getting fruits and Cheerios as a reward” concluded Nicolelis.