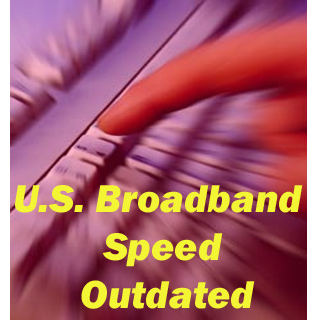 A communications union report has revealed that the apparently ‘high-speed internet broadband connection speeds in U.S. are in reality ‘pathetic’ in comparison with other industrialized nations.

The study was issued by the Communications Workers of America in Washington in an effort to get the Federal Communications Commission to redefine what form true high speed, USA Today reported on Tuesday.

The median U.S. speed was 1.97 mps, while the Iowans enjoyed (or perhaps were sadly stuck with) a median download speed of 1.2 megabits. The only states slower than Iowa are Alaska, West Virginia and Wyoming.

On the other hand residents of Rhode Island had reasons to smile as they were the fastest state, with 5.01 megabits. The same file that takes 15 seconds to download in Rhode Island takes more than 2 minutes to download in Iowa. So now you know how significant the difference is.

But beating any of these is Japan where users receive speeds of 661 megabits per second, South Korea averages 45 mps, France has 17 mps, and Canada has an average 7 mps.

Whilst speaking to USA Today, CWA President Larry Cohen said, “We have pathetic speeds compared to the rest of the world.” Adding, “People don’t pay attention to the fact that the country that started the commercial Internet is falling woefully behind.”

Around 12 years back, at a time when dial-up connections were common, FCC had gone ahead and stated that an ideal ‘high speed’ would be that of 200 kilobits per second. However, 12 years is surely a long time ago. A time when the internet was relatively simpler and more basic, so keeping the same parameter till now may be a little obsolete.