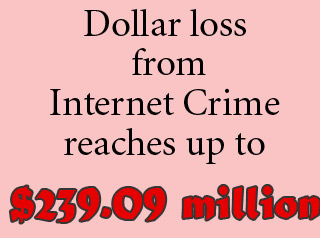 Internet Crime Complaint Center’s (IC3) 2007 Internet Crime report suggests that, in 2007, dollar loss reported from Internet crime reached up to $239.09 million. This number is considered to be the highest loss till date.

IC3 registers field complaints about online crime on behalf of the Federal Bureau of Investigation and the National White Collar Crime Center.

“The Internet presents a wealth of opportunity for would-be criminals to prey on unsuspecting victims, and this report shows how extensive these types of crime have become,” said James E. Finch, assistant director of the FBI’s cyberdivision.

“What this report does not show is how often this type of activity goes unreported. Filing a complaint through IC3 is the best way to alert law enforcement authorities of Internet crime,” he added.

Also an Internet Crime report says that the US possesses the highest rate of Internet crime with 63.2 percent, followed by UK and Nigeria with 15.3 percent and 5.7 percent.