US Cellular Samsung Ativ Odyssey price out, first WP8 phone for the carrier 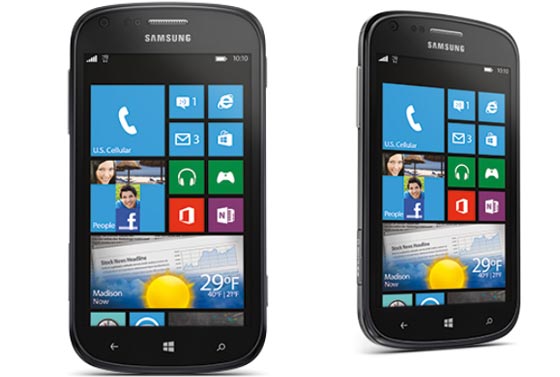 US Cellular has got its first Windows Phone 8 device with the Samsung Ativ Odyssey that can be grabbed online for a price of $49.99 after a $50 mail-in rebate. This handset is only the second Windows Phone gadget available through the carrier, the other being the ZTE Render which works on the older version of the Microsoft OS.

Though the Odyssey is already up for sale online, it won’t reach the network operator’s stores until July 11, that’s tomorrow. This is the same phone which has been on Verizon Wireless since January. It’s not extremely impressive in terms of specifications, but should widen the choice for those in the market for a mid-range smartphone. Xbox Live integration, NFC and 4G LTE fall under the device’s connectivity features.

A 4-inch touchscreen of 800 x 480p resolution is nailed across its front panel. It is driven by a 1.5GHz dual core processor and has 1GB of RAM. The measly 8GB of onboard storage space is supplemented by a microSD slot which can take a card of up to 64GB tops. Sitting above the display is a 1.2MP camera, while the rear is given to a 5MP sensor with auto focus and 4x digital zoom. Although 4G LTE is mentioned, only a little over 60% of customers actually come under the coverage area presently.

Those who want to lay their paws on the Windows Phone 8 handset will have to cough up a $35 activation charge, pick a smartphone data plan and also sign up for a 2-year contract. This is in addition to the $49.99 we mentioned above.