iPad users have been requesting Microsoft to add the ability to create new notebooks to the respective mobile application and looks like the software giant has finally paid heed to their demands. The official company blog has revealed that the app has now been updated with new features pertaining to notebooks and sections. Also, a new version of OneNote for iPhone has been made available through iTunes.

Notebooks in OneNote are an efficient way of keeping content organized and allowing users to create new ones through the iPad for SkyDrive should definitely help them stay productive at all times. Thus, a ‘Create Notebook’ tab has been placed just below ‘My Notebook’ and subscribers can simply tap on it to make a fresh one. And that’s not quite all. Some improvements have been introduced for sections which are nothing but different groups of notes within a particular notebook. From now onwards, it is possible to generate new sections from the Apple tablet by tapping on the ‘+’ button on the dedicated bar. Apart from this, you can delete or rename an existing section too. 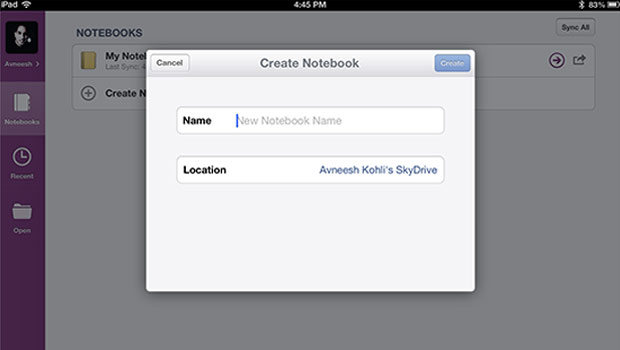 Microsoft has moreover fixed bugs for both editions of OneNote and has added certain Japanese typing improvements for curbing slow responsiveness. Some new text formatting options as well as automatic list detection to cut down on time required for formatting text, have also been tossed into the mix. Furthermore, the company has slashed the download size of the iPhone application by more than half of the previous version so it doesn’t take up a lot of space on your phone anymore.

The OneNote for iPhone and iPad apps can be downloaded for free via iTunes.