Facebook has once again updated its news feed and this time the social networking website’s goal is to make the SNS more consistent across all platforms. The company says in its blog that it will be easier to use because the designs on the desktop and mobile now look similar.

The portal had experimented with a new design last year and it received feedback that revealed most people prefer big photos on their news feed. But the layout that was being tested did not score brownie points for its navigation. Facebook took into consideration the suggestions and complains to come up with a new design featuring bigger images, but which continues to have the navigation and layout that users have come to like. 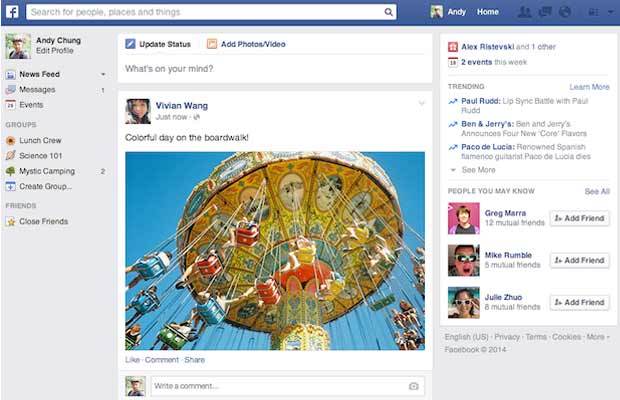 A new font has also been bestowed upon the new layout. However, this updated design will only be made available for desktops, while mobile applications will look the same. It should be noted that only visual alterations have been introduced and posts’ rankings will not be affected. Organic stories and advertisements will continue to have the same size thus, marketers need not adopt new methods to optimize ads.

The new layout of the Facebook new feed has already gone live for some users. Others can expect the updated design to hit their profiles sometime in the coming weeks. Have you got it already? Drop in a comment to let us know if you like it or not.