Vivo is up to something very big it seems, as a leak has given away details regarding one beast of a smartphone which is set to be the company’s new flagship. Equipped with a 6-inch display and ultra high-end specs, this device will be competing against top-tier offerings from big companies like Motorola, Samsung, LG and more.

While we don’t have a name for this Vivo smartphone yet, its model number has been revealed to be ‘PD1305.’ An image going around on Weibo (via G4 Games) is alleged to bear the exact list of specs of the device, which is giving us a fair idea of what to expect from it. 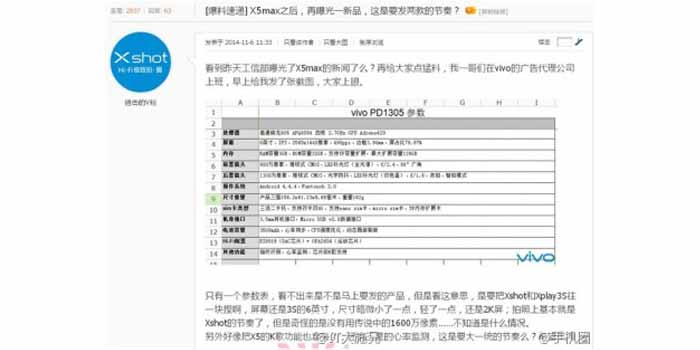 It tells us that a quad core Snapdragon 805 processor will be powering the handset from within, gaining support from 3GB worth of RAM. A 6-inch display bearing a resolution of 2560 x 1440 pixels has apparently found its way onto the Vivo smartphone, with its screen-to-body ratio being 79.95 percent.

Only 32GB worth of storage is available on it, but the microSD card slot which the handset houses features support for an additional 128GB. The leaked document is also saying that a 13MP main camera with optical images stabilization, an f/1.8 aperture and a dual-tone LED flash will find its way onto the device, apart from an 8MP front-facing snapper with an f/2.4 aperture and a 88-degree wide-angle lens.

Here’s a look at the leaked specs of this upcoming Vivo flagship:

This one sure looks like a powerhouse, and if leaks about another Vivo phone which is set to be the world’s thinnest smartphone are anything to go by, the Chinese company seems set to make a big impact on the market this year.