Unreal Tournament 3 to be Available on the Xbox 360 Soon 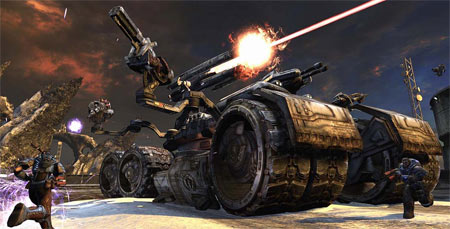 Midway Games and Epic Games have announced to ship the Unreal Tournament 3 game on the Xbox 360 platform. The game is already available for PC and PlayStation 3 systems. It includes new features such as split screen, five exclusive maps and two all-new characters.

Unreal Tournament 3 is a first-person shooter game where gamers are engaged in intense battles with other human players online, or against Unreal artificial intelligence. For such battles, gamers are equipped with powerful futuristic weapons and vehicles.

Besides, the game will boast an exclusive video preview of Gears of War 2, an eagerly anticipated game. This video will give a brief idea about the Gears of War 2 title through a never-before-seen footage of the game’s multiplayer modes featuring new maps, new modes, new weapons and new gameplay elements.

“Unreal Tournament 3 for the Xbox 360 will deliver fans the award-winning gameplay of UT3, complete with exciting exclusive content that will make it a must-have title for the Xbox 360” said Mona Hamilton, vice president of marketing, Midway Home Entertainment.

“We’re very excited to be shipping Unreal Tournament 3 for Xbox 360,” said Mark Rein, vice president of Epic Games. “This is a great title and, with two-player split screen support and some very cool new content, Xbox 360 players should be thrilled with this fantastic version of the game.”

Unreal Tournament 3 is rated “M” for mature by the ESRB. The game is scheduled to launch on July 7, 2008 on the Xbox platform.