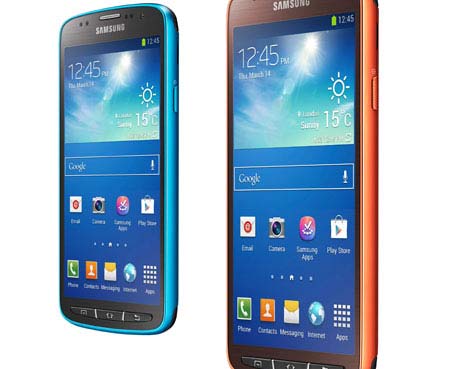 The Samsung Galaxy S4 Active is soon to hit availability status in the UK along with other siblings in the flagship series and the Mega smartphone. Various retailers have already started taking pre-orders for the latest Samsung devices and they’re expected to go on sale starting next month.

The Samsung Galaxy S4 Active is the ruggedized version of the conglomerate’s current flagship. The device is basically a response to the Xperia Z and the Optimus GJ smartphones that boast of water- and dust-resistant characteristics. The phone in question was officially launched a couple of weeks back and it is also up for pre-order in the US where carrier AT&T has claimed exclusivity over it. Additionally, it was recently showcased at the Premier event in London along with other Galaxy and Ativ devices. 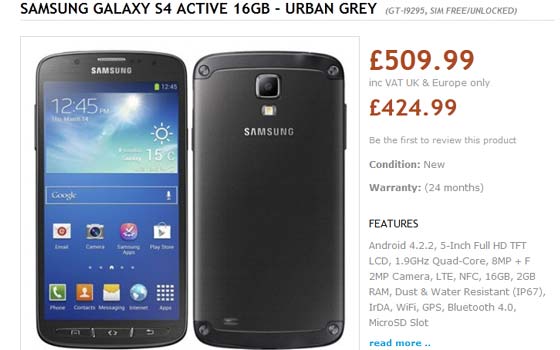 Design-wise, the Samsung Galaxy S4 Active is 9.1mm thick and it tips the scales at 151 grams. The smartphone is also crafted to meet IP67 standards, making it resistant to water and dust. The front houses a 5-inch 1080p HD LCD display instead of a Super AMOLED one and the rear camera has been downgraded to 8MP from 13MP. One of the highlighted features here is the Aqua mode which helps enhance images and videos being taken while the phone is submerged.

There doesn’t appear to be other modifications carried out to the internal hardware. A 1.9GHz quad core Snapdragon 600 processor powers it up with assistance from 2GB of RAM and there’s 16GB of internal memory, a microSDXC card slot for expansion as well as a 2600mAh battery. 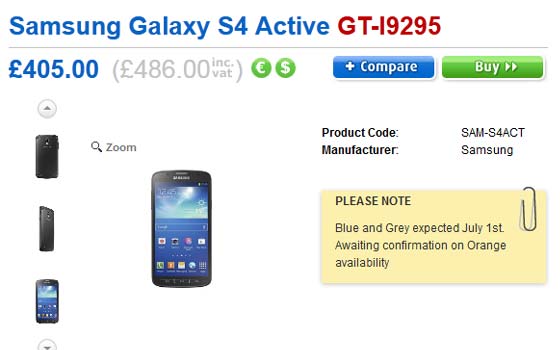 A post of the Clove blog states that the Galaxy S4 Active will be available unlocked for a price of £486 starting July 1. Additionally, the retailer also states that the S4 mini and the Mega 6.3 will be up for grabs as well, on the same day for £376.80 and £454.80, respectively. Handtec that’s also selling the S4 Zoom, plans on making the smartphone in question ready to ship on June 28 for £509.99.