The world of Android apps and other utilities is unarguably an extremely large one and AT&T understands this to the fullest which is probably why it has decided to help its customers make the most of Google’s OS. Each smartphone or tablet running the Android platform which is purchased from the carrier will net $50 of Google Play store credit.

With this, users will be able to download apps, games, movies as well as eBooks onto their gadgets without spending their own money on them. A large number of phones and tablets are eligible for this offer, and a two-year agreement is not a necessity as this deal also works with AT&T’s Next plans. 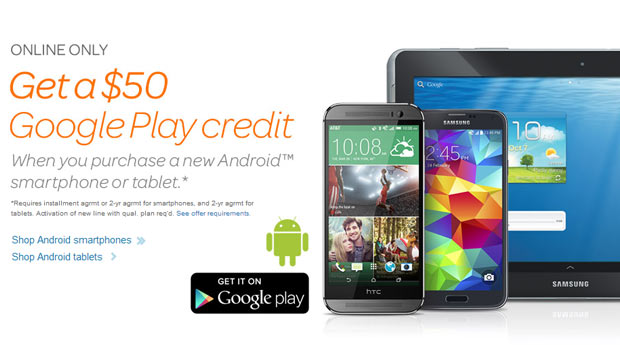 It’s supposed to last till June 17, so you have quite some time on your hands to make your choice. Once the Android device is purchased and activated on the said network, an email will be sent to the customer, entailing the code that will need to be redeemed on the Google Play store. $50 will then immediately be added to their Wallets.

Almost all Android-based smartphones and tablets are applicable for this deal, including that the newest members of the AT&T family, the Samsung Galaxy Tab 4 10.1 and the Note Pro 12.2. While the former has been priced at $380, the latter has gone for a $799 tag. Both these values will bring with them two-year contracts.

To know more about the AT&T deal which is offering $50 of Google Play store credit with new Android devices, visit this page put up by the Big Blue carrier.