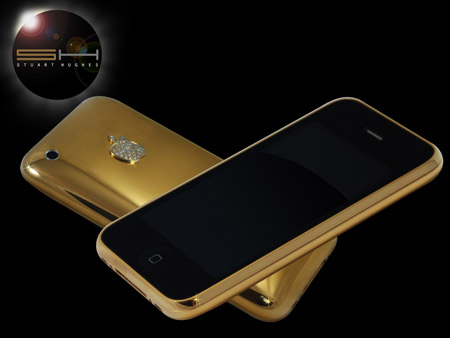 Stuart Hughes, the designer who is known for redesigning high-end mobile handsets to give them a body of gold or precious gem stones, for Gold Striker, has now unveiled the shiny new 22ct solid gold iPhone 3G. Global economic crunch doesn’t seem to bother this man!

The revolutionary iPhone not only comes encased in 22 carat solid gold it also has the Apple logo on it made out of 53 WS1 diamonds! This super-duper precious iPhone is available as an unlocked phone for support for all networks around the globe.

And it is only the 16 GB model of the iPhone 3G that is available in this lustrous metal form. The gold iPhone 3G retains all its technical specifications which are the 320×480 touchscreen, Bluetooth, WLAN 802.11b/g, built-in 2 megapixel camera, microphone, talk time of 10 hours, standby time of 300 hours and more.

This solid gold phone has been crafted by four proficient craftsmen including Hughes who worked on it for months, in Liverpool UK. And the price of all this is just £22,995.00!

The phone is available for purchase on Stuart Hughes’ official website which has gone live from April 30, 2009 onwards.