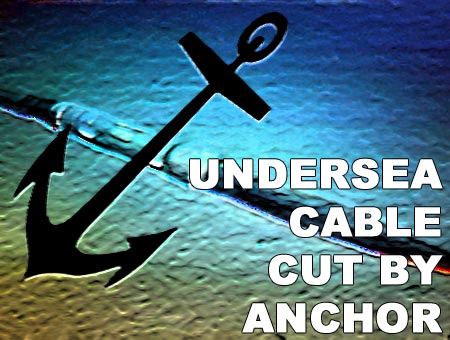 Earlier this week, we had reported that an undersea cable was cut in the Middle East. It was the fourth undersea fiber optic cables to be cut in seven days. The company that was mainly affected by it was India-based FLAG Telecom. Now they have sent word that at least one of the three undersea cables was cut due to a derelict six-ton ship anchor.

FLAG Telecom has stated that they will soon be laying down a new, tougher cable between Egypt and France. This undersea cable will not only be strong, but will also be laid on a different route. It will be 1,900-mile-long, but FLAG has said that the new cable will take more than eighteen months to be laid. FLAG Telecom is in charge of the 17,500 mile long Fiber-Optic Link Around the Globe. The undersea cable runs from Japan to the eastern coast of North America.

The conformation that an anchor cut the undersea cables rules out the many conspiracy theories that had been put forward. Analysts too have downplayed the theories. Many conspiracy theorists were blaming the American government but analysts refute it was the US military making use of those cables and would have found it quite inconvenient. Though on the other hand, it has been said that it could have been very easy for anyone to get a trawler with an anchor and use it to cut the cables.

Internet usage in India has been affected by the snapping up of the undersea cables. In fact, the ISPs in India had warned users that their services will be slowed by fifty to sixty percent. Though the internet service has been restored to normal, there are reports that some internet users are still affected.