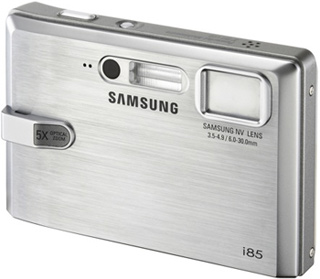 Today, Samsung Camera launched its 8 mega pixel i85 digital camera. The Samsung i85 is an ultra-thin digital camera which packs in a number of great features.

First off, the i85 is roughly the size of a credit card as it measures just 3.7” x 2.4” x 0.8” and has a brushed silver aluminum body to match. It also sports an impressive 3-inch high-resolution LCD screen.

Along with the 8 mega pixels, the i85 also manages to pack in a non-protruding 5x optical zoom NV lens that boasts a maximum shutter speed of ½,000 sec and a super macro focus of 1cm.

What’s more; the Samsung i85 digital camera features a PMP functionality that enables users to enjoy movies, music videos, TV shows and even their favorite music playlists while on-the-move.

Besides, the i85 also features Samsung’s innovative World Tour Guide function that provides useful travel information covering 4500 regions in 30 countries worldwide. This features helps users to plan their trips and even find their way on the road.

So, when the i85 is set in PMP mode, one can listen to MP3 files or watch videos on the camera’s large 3.0-inch high-resolution display.

In case you need to convert music and videos to load on to the camera then the Samsung i85 digital camera comes bundled with the Digimax Converter software that seamlessly converts the user’s MPEG, AVI, MOV, WMV and ASF, MP3 and WAV files to be loaded on to the camera with ease.

Plus, the Digimax Converter software also allows users to view subtitles, adjust the screen size and even crop and stretch the image to fit the camera screen as desired.

And, if you were wondering about the audio capabilities of this camera, then you must know that the i85 digital camera features a 2.5mm headphone port as well as stereo speakers that boast SRS 3D acoustic technology.

Now for the actual features of the Samsung i85 digital camera:

The Samsung 8 mega pixel i85 digital camera has 256MB of internal memory and also has provision for an external SDHC/SD card with a maximum of 4GB storage capacity.

This 8 mega pixel digital camera carries a price tag of $349 and will be available in Fall 2007.