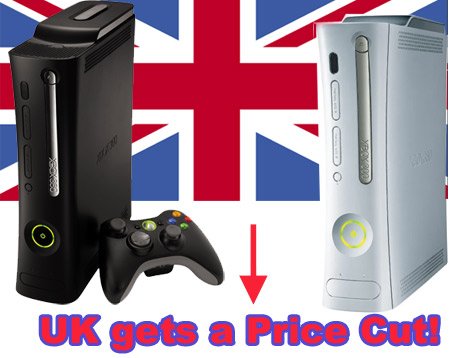 Just a few days ago, we reported about the Xbox 360 Elite India launch. Much before this, the US saw the Xbox 360 console get a $50 price cut. Now, its time for the UK to get some good stuff, obviously! Yes, it seems like Microsoft is splashing out surprises, not only in a sporadic manner, but also on a rather organized and country-wise basis.

Microsoft has announced that the Xbox 360 console gets a price cut in the UK. Plus, the Brits also get the uber-cool Xbox 360 Elite console.

According to Microsoft, the lower cost opens the door to Xbox 360 for more people, helping to broaden the market for gaming and enabling more people to enjoy highly-anticipated games like Halo 3, Scene It?, Bioshock, Project Gotham Racing 4, Mass Effect, Naruto and Ace Combat 6: Fires of Liberation.

The Xbox 360 Elite will as usual carry a price of £299.99 when it launches on August 24. The black Elite console comes with a massive 120GB hard drive and a high-definition multimedia interface port (HDMI).

As well as the Xbox 360 Elite console, a range of accessories will be made available including:

Xbox 360 120GB hard drive: The massive 120GB detachable hard drive allows gamers to not only save their games but also store video, music, pictures, trailers, levels, demos and other content available from Xbox LIVE Marketplace. It is designed for Xbox 360 owners who wish to upgrade to higher storage capacity. Estimated retail price £129.99

Xbox 360 Wireless Controller: Now available with a sleek black finish to match the Xbox 360 Elite, this award-winning, high-performance wireless controller features the Xbox Guide Button for quick, in-game access to friends and music. It has a range of up to 30 feet and a battery life of 30 hours on two AA batteries. Estimated retail price £32.99

According to Stephen McGill, Head of Gaming & Entertainment, Xbox UK, “Whether it’s our lead in console sales, record-setting games and accessory attach rates or our leading online service, evidence is everywhere that Xbox is thriving,” continued McGill. ”When you combine that momentum with these great-value offerings with our unbeatable Christmas game line-up, it’s clear that Xbox 360 is uniquely placed to take the UK by storm this Christmas.”