Now dual boot Ubuntu and Android on your smartphone, tablet

It’s been a good year for Canonical apart from the Edge smartphone missing its crowdfunding goal. Its Ubuntu touch platform for smartphones and tablets has been well received by the developer community and now, the company has unleashed its next phase – The Ubuntu and Android dual boot developer preview.

If you haven’t guessed by now, this beta release will allow Android and Ubuntu mobile OSs to be dual bootable on a single device without the need to flash separate ROMs on each startup. This capability is made available through a simple application that allows you to conveniently switch between Android and Ubuntu images. As the name suggests, this is a developer only release and it is not meant for normal users. 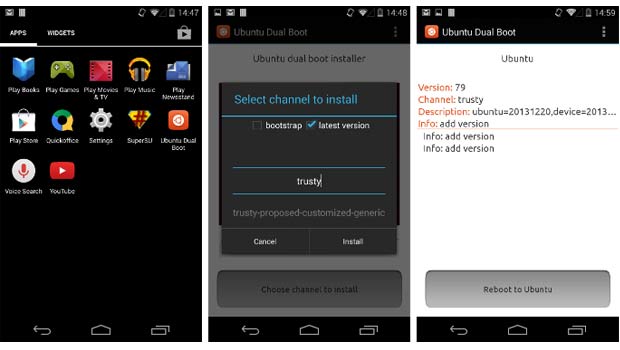 Well, if you’re ok with tinkering around with your device and have knowledge about re-flashing firmware if something goes wrong, then there’s no reason to stop you. However, there is a slight catch. So far, only the Nexus 4 smartphone is fully supported, while Canonical highlights that other Nexus devices should also be compatible ‘in theory.’

The process for installing Ubuntu touch on an Android device is quite simple. For now, the smartphone or tablet needs to run on version 4.2 Jelly Bean and above. AOSP or stock and CyanogenMod firmwares are compatible and you need to have an unlocked bootloader as well as root access. The Ubuntu image is 2.7GB in size. 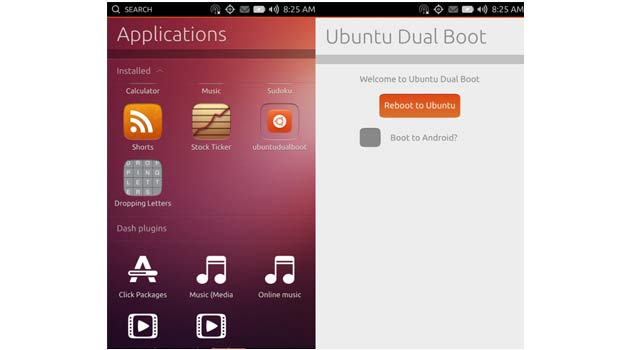 Ubuntu and Android dual boot developer preview is another milestone for Canonical. In the future, Android and Ubuntu touch devices could deliver a complete Ubuntu desktop experience when connected to an external display much like what Motorola’s WebTop offered, but with much more functionality.