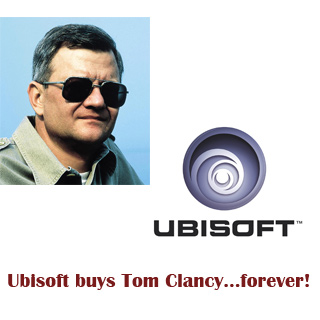 Ubisoft has announced that it has attained the intellectual property rights to use author Tom Clancy’s name on a permanent, royalty-free basis in video games, movies, books and merchandises connected with its Tom Clancy’s name.

For almost a decade, the renowned video-game publisher has produced games revolving around the “Tom Clancy universe”.

Ubisoft CEO Yves Guillemot said, “After 10 years of a highly successful collaboration that has seen the creation of blockbusters that set standards in the video-game industry, such as ” Tom Clancy’s Splinter Cell,’ ” Tom Clancy’s Ghost Recon’ and ” Tom Clancy’s Rainbow Six,’ today, acquiring the perpetual property rights of the Tom Clancy name for video games and related projects is a major event.”

Guillemot continued, “The future of our industry lies in our capacity to create and develop brands that captivate consumers and that present myriad of opportunities for the full spectrum of entertainment, be it video games, books, movies or other media. Capitalizing on the strong franchises that we’ve built over the past 10 years, we will take the Tom Clancy game brand to the next level of the global entertainment industry.”

Clancy formed his own game development company Red Storm Entertainment in 1996, which was later acquired by Ubisoft. Clancy has the due credit of penning well-known books such as The Hunt for Red October, Rainbow Six and Clear and Present Danger. Several of his books have been successfully adapted to video games and films.

This latest deal sounds extremely lucrative for Ubisoft, as post this acquisition it will no longer have to pay Clancy a royalty for the use of his name. In a statement issued, Ubisoft said, “The royalty savings generated by this acquisition are estimated to have an average positive impact on Ubisoft’s operating income of a minimum of 5 million Euros per year.”

According to Newsweek, Ubisoft has paid as much as around $128 million for the deal.