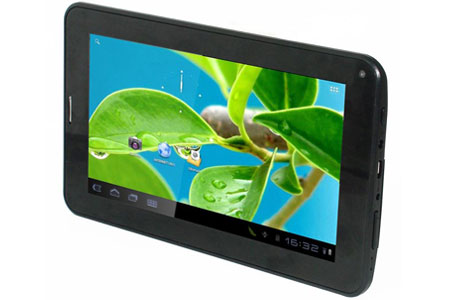 Datawind has unleashed its latest Android tablet, the Ubislate 7C+ Edge in India for a price of Rs. 5,999. The device is a calling slate and manufacturer Datawind expects it to be launched under the label Aakash 3 in the country. After seeing a good deal of success with the Aakash 2 which received a 6 on 10 in our review, it seems the tablet-maker is batting for more functionality while still maintaining a budget stance.

The company took the lid off the UbiSlate 7C+ Edge in September last year with GPRS connectivity. That announcement also included other devices, namely the 7Ri, the 7R+ and the 7Ci. But the variant revealed now gets a slightly higher cellular option, and will be capable of latching onto EDGE networks. 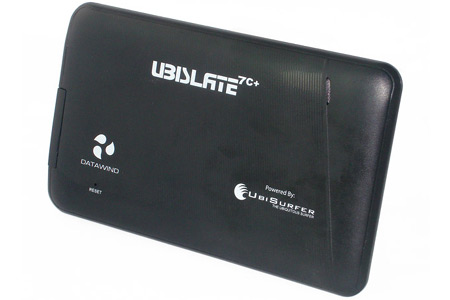 In terms of specs, the calling tablet can boast of 4GB of internal memory, a good feature for any budget device today. And there is a microSD slot which can accept cards of up to 32GB in capacity. Unfortunately, it could be considered lacking in people’s eyes in terms of the platform on which it operates. When so many gadgets even from Indian manufacturers are being pre-installed with the latest Android OS, Jelly Bean, the phablet can only manage Ice Cream Sandwich (version 4.0.3).

Besides its ability to connect via EDGE networks, it comes with a built-in Wi-Fi antenna allowing users to save on their data plans whenever possible. Sadly, Bluetooth and GPS haven’t been included, so functionality will be understandable limited. And when it comes to photography, the device once again shows its budget colors with a VGA front-facing webcam. 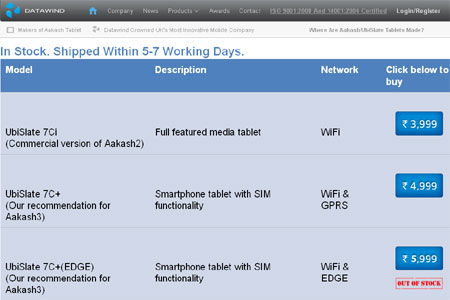 Bringing content to users is a 7-inch capacitive display which is capable of multi-touch input and visuals at a resolution of 800 x 480 pixels. Under the hood is an ARM Cortex A8 processor running at 1GHz, while keeping track of apps and tasks is 512MB of RAM. According to information on the Datawind website, the company expects the Aakash 3 to see a launch in the country sometime in the middle of the year, while specs are supposed to be finalized before the end of March.

The Datawind UbiSlate 7C+ Edge is available to purchase in India on Snapdeal, Infibeam and eBay at the aforementioned price and the promise to ship within 5 days, and at the time of writing is yet to show up on e-retailers including Flipkart, Saholic and HomeShop18. What’s odd is that the official company website has the device listed as out of stock, without the option to buy.