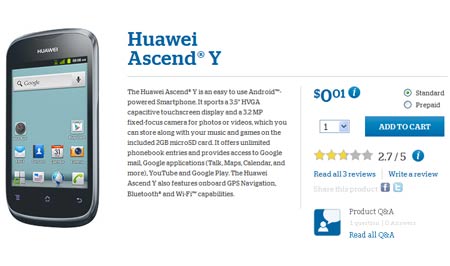 The Huawei Ascend Y and its price details are now available via U.S. Cellular for the budget-minded seeking an Android smartphone at a cost-effective tag. For a little under $30, users will get a taste of the Gingerbread platform through a capacitive touchscreen and access to a wide catalog of games as well as apps from the Goggle Play store.

Fitted within dimensions of 4.6 x 2.4 x 0.46 inches are an 800MHz processor, 256MB of RAM and a 3.5-inch HVGA touchscreen which portrays a resolution of 480 x 320 pixels. The rear is dominated by a 3.2MP camera that packs in video recording capabilities as well. A 2GB microSD card is included with the smartphone and users will be able to throw in up to 32GB of external storage. The overall weight of the Ascend Y amounts to 4.41 ounces including a 1400mAh Li-ion battery that’s capable of delivering up to 4.8 hours of talktime or 12.7 days of standby over the carrier’s CDMA EvDo Rev A network. 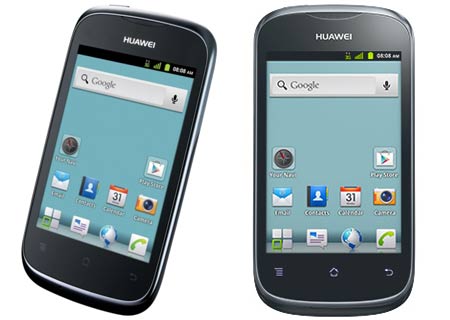 This easy-to-use Huawei device arrives with a host of features including Google Maps, Navigation, Gmail, YouTube and Swype input. Users will also have GPS navigation, Bluetooth and Wi-Fi connectivity onboard. For entertainment, the company has thrown in the DTS Envelo technology which aims to enhance the overall audio experience through virtual surround sound output.

The Ascend Y is now up for grabs at $29.99 with a 2-year service agreement, while the carrier’s product page appears to be offering this handset at a discounted rate of $0.01 on contract basis. Those seeking a prepaid option can pick up the device for $99.99.