Apart from the Galaxy F and the Note 4, there’s a lot more to look forward to from Samsung as two new smartphones have been spotted online. While one device appears to fall in the mid-range segment, the second one features a 64-bit processor accompanied by low mid-end specs.

PhoneArena reports that the 64-bit smartphone was listed under the model number SM-G5308W on GFXBench. Quite a bit of information has been divulged through the benchmark. Firstly, the device carries a 5-inch display and offers qHD 960 x 540p resolution. The processor on the inside is none other than the 1.2GHz quad core Snapdragon 410 with Adreno 306 graphics. 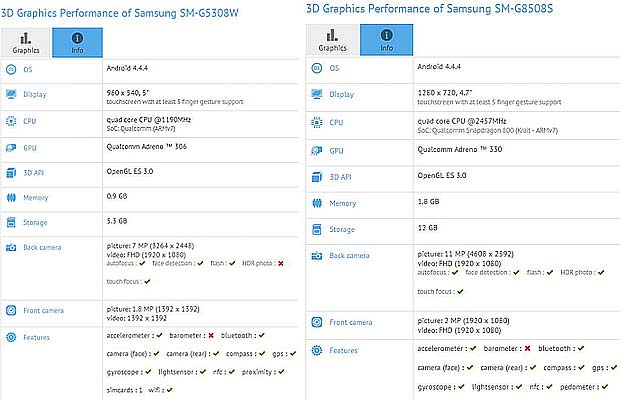 Other features of the phone include Android 4.4.4 KitKat, an 8MP rear camera, a 2MP front snapper, 8GB storage and 1GB RAM. This isn’t the only 64-bit phone Samsung is working on. Last month, we spotted a device under the model number SM-G510F which also features the Snapdragon 410 chip, but with a 4.8-inch display. Apart from this, the Galaxy Mega 2 is said to have the same SOC as well, but with mid-range features.

Also see: Here’s how you can get the Samsung Galaxy S5 LTE-A outside Korea

The second device on GFXBench is the Samsung SM-G8508S that appears to be a no-compromise mid-range phone. The handset will carry a 4.7-inch 720p HD screen (probably Super AMOLED) and run on Android 4.4.4 KitKat. It will be powered by a 2.5GHz quad core Snapdragon processor which is rather surprising, coupled with 2GB of RAM. Apart from these components, there will be a 2MP front camera and a 13MP rear snapper.

There’s no word on when Samsung plans to unveil any of the aforementioned smartphones, but the IFA 2014 which is set to take place in Berlin this September is the best launch platform for now.