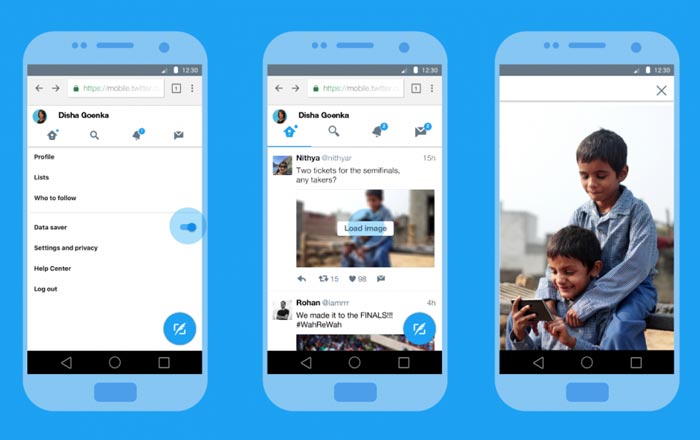 Twitter has launched a lightweight version of its site for smartphones dubbed Twitter Lite, specifically targeting countries like India where connectivity issues are abundant. It’s choosing to optimize its mobile site rather than the app since many people have phones with limited storage space.

Twitter’s combating slow network speeds and expensive data plans with promises of an all-new mobile web app experience that loads quickly on turtle-like speed connections, cuts down on data usage, works on unreliable mobile networks, and occupies less than 1MB of room. The website itself is supposed to launch 30% more rapidly and feature faster navigation.

Twitter Lite offers the main aspects of the full-fledged site like Tweets, Direct Messages, profiles, Trending topics, media uploads, timeline, and notifications. It adds a data saver mode to mix, automatically generating a preview of an image or video in a tweet. A person would then have the freedom to choose which media to fully load.

Twitter claims this reduces data usage by up to 70%. Its Lite site is accessible via a number of browsers including Chrome, Safari, Firefox, Android Browser, Opera, and Microsoft Edge. There are some additional features packed within the first, letting you activate push notifications similar to an app.

Twitter Lite further offers offline support, with the company claiming that users won’t be interrupted if they temporarily lose their connection. It’s also encouraging people to add the page to their handset or tablet’s home screen for easy access, just like an app.

Twitter’s partnered with Vodafone to market Lite in India. The latter plans to promote it as a means to get live IPL cricket score updates. It’s also available globally and can be visited via this link.