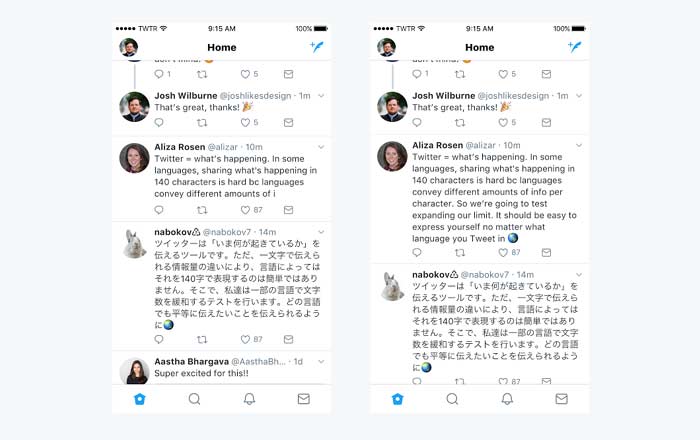 After 11 years of stubbornly sticking to its 140-character limit, Twitter has finally decided to increase the constraint to 280 characters. Only a small group of users will be able to take advantage of the new rule as of now.

This is probably one of the biggest changes Twitter will be imposing since it was launched in 2006. Back then, the 140 cut-off was meant to comply with the 160 SMS character limit. Things have turned around drastically since then. Still, loyal users will likely find it hard to deal with the new decree since the earlier limit was one of the platform’s defining traits.

As expected, Twitter’s decision has been met with mixed reactions. Some are angry that the site is focused on increasing the character limit and not its high-profile harassment issues. Others believe that it will lead to excessively long tweets that don’t have the brevity of a 140-limited one.

Twitter explained the reasoning behind its sudden about-turn in a blog post. The company claims that people who tweet in English frequently hit the 140-character limit, but Japanese, Chinese and Korean tweeters don’t face the same issue because they can express double the amount of information in one character.

Research into this disparity showed that the 140-character constraint was a source of frustration for English Twitter users, but not for Japanese ones. Moreover, markets where individuals didn’t have to constantly edit their tweets saw more tweeting.

Twitter took in all this data and has now decided to try out a longer limit of 280 characters specifically in languages impacted by cramming. It’s a pretty wide net which covers almost all tongues except for Japanese, Korean and Chinese.

Twitter’s planning to gather data and feedback on the 280 limit before rolling it out for all. It seems pretty set on its course, so everyone will just have to get used to having more space to express their thoughts, good or bad.