The Twitter for Windows Phone application has received some much-needed improvements and tweeple will be glad to know that it now allows them to get quick access to tweets from their favorite people. The official Facebook app for the platform developed by Microsoft, was also bumped up with features not long ago.

So what exactly has been tossed into the mix to make this version of the utility better than the previous one? First and foremost, the micro-blogging website is giving you the option to choose a backdrop based on your preferences. You can make the choice between light and dark themes within the app. Now that the appearance of the application has been taken care of, let’s move on to the functionality bit. 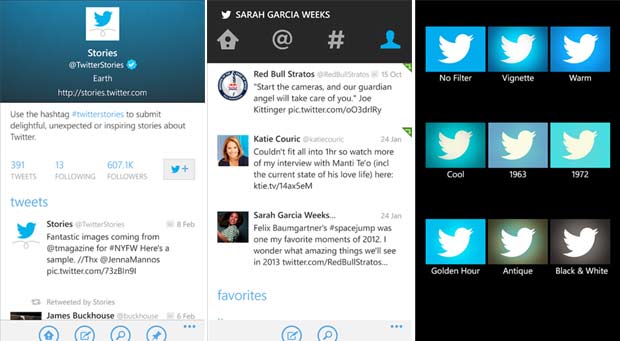 The developers are making sure that Windows Phone users do not miss out on posts from any of their favorite Twitter handles. Subscribers can list out people in the favorite section and the application will send notifications as and when these users tweet. Another useful feature that the new update tags along is the ability to pin up keyword searches as Live Tiles on the homescreen to automatically launch a search in the micro-blogging website when you tap on it.

Messages people receive on Twitter will be synched directly, so if you read it on your WP gadget, it will not show up as unread when you open the account on a Windows PC. And in case you want to connect with subscribers who do not speak your language, no worries. The language preference attribute translates all the tweets into your language, provided it is supported by the application.

The new updated version of Twitter for Windows Phone can be downloaded via the official store for devices running WP 8 or 7.5 platforms.