Twitter is on to something, Mute button spotted on apps

There seems to be no end to new features entering the Twitter realm. Just as we are coping with the fresh page layouts and notification pop-ups, we have a report about a Mute button being tested by its developers. Some users are apparently getting this option right now on the Android and iOS apps of the micro-blogging site.

This is nothing new to folks who use third-party clients like Tweetbot and TweetDeck, but the Mute button becoming a part of the official Twitter services is definitely a big deal. As The Verge is reporting, this trait allows you to block tweets and retweets from another account without blocking that person on the whole. 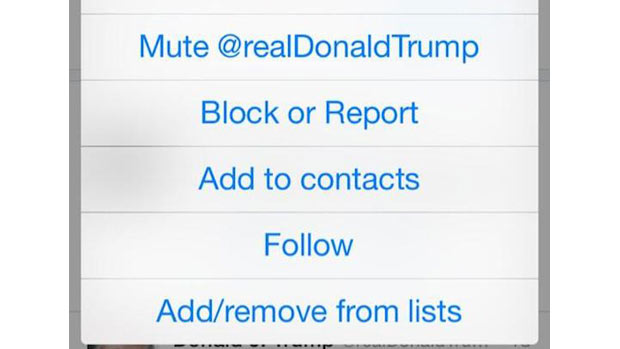 So if you’re afraid to hurt someone’s feelings by unfollowing them, there’s a way to opt out of their conversations without letting them know. And since, you can easily unmute them whenever you want, there’s no worrying about missing out on something important from them. They can still send you direct messages or tag you in their posts however.

Since random users are reporting seeing this feature, you could very well also be a part of it. In order to check, just open the Android or iOS versions of the Twitter app, go to someone’s profile page and click on the gear icon. The Mute option should appear at the top of the subsequent menu if available.