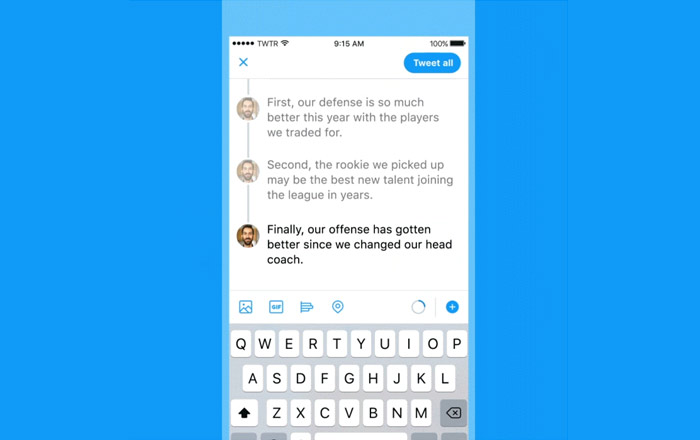 Twitter has been experimenting with a tweetstorm feature that allows users to post multiple linked tweets at the same time for about a month now. It’s now ready to make the skill available to everyone, dubbing it ‘threads.’

Threads basically allow people to stitch together tweets in one go instead of having to post a tweet and then type up another one to link to the previous one. Individuals have been doing this for years now, making the so-called tweetstorm a popular aspect of its community.

Tweetstorms let people tell a long story or post live commentary as events are happening, presenting a unique way of expressing a train of thought. However, it can be tough to discover all the tweets in a thread or even make one in the first place. The latest change is meant to make things a whole lot easier, both for the poster and the reader.

Also See: Twitter ups character limit to 280 for all

To get started, a person would have to begin typing a normal tweet and then tap on the brand-new ‘+’ icon on the lower left side of the composer screen. Each new tweet can be of the same 280-character length and include photos and videos. Twitter currently allows for 25 posts in a thread, but this could change depending on how the feature is used.

Twitter’s even allowing members to add more tweets to a thread after its been published with an ‘Add another Tweet button.’ One major concern which users might have is that their timeline will get completely cluttered with long tweetstorms. The firm’s trying to alleviate that by only allowing 3 linked tweets to be displayed at a time.

People will have to tap on a ‘Show this thread’ label to expand the complete list. Twitter’s rolling out threads to iOS, Android, and its desktop site over the course of the next few weeks.