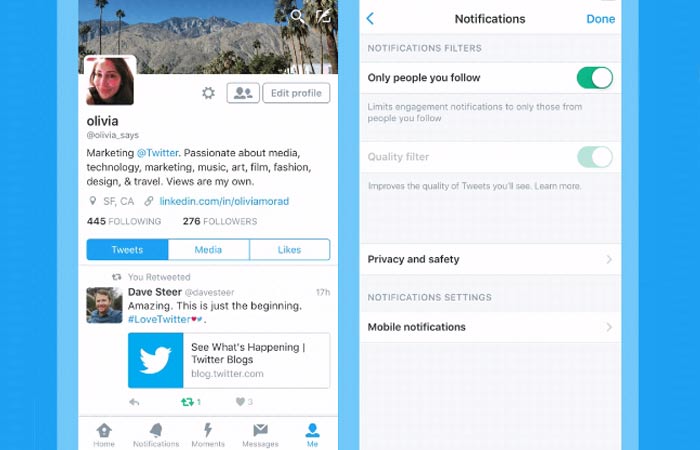 Twitter’s been facing a barrage of criticism for quite a while now when it comes to the way the microblogging site handles abuse. The company has finally decided to do something about the problem by introducing a couple of new features to make interactions on the platform troll-free.

First-off, users can now change their notification settings so they only see alerts from people they follow on Twitter’s desktop and mobile platform. While it might make their circle a bit smaller, the system could go a long way in reducing the number of trolls who can force their way into a person’s feed.

For those worried this could have a negative impact, Twitter is trying to assure them by stating that their experience on the site will remain unchanged. The firm is also making it easier to manage notification settings by making them directly accessible via the Notifications tab.

Members can switch to the new system by heading to Notifications in the navigation bar, tapping on the Settings icon, and then switching on the ‘Only people you follow’ option. There’s also a new Quality Filter choice below it, which is the next big change Twitter is introducing.

Twitter began testing the Quality Filter setting last year. The social media juggernaut has now decided to make it available for all its consumers. Once activated, the site claims the feature improves the quality of Tweets people see. Its algorithm is based on a number of factors such as account origin and behavior.

According to Twitter, Quality Filter makes sure inferior posts like duplicate Tweets and automated content is eliminated from a person’s feed and notifications. It’ll apparently keep track of the accounts people follow and have interacted with recently to make sure their posts aren’t eliminated as well.

Twitter says the tool has been designed to learn and improve over time. The new features are rolling out to everyone right now and should hit all users within a couple of days.