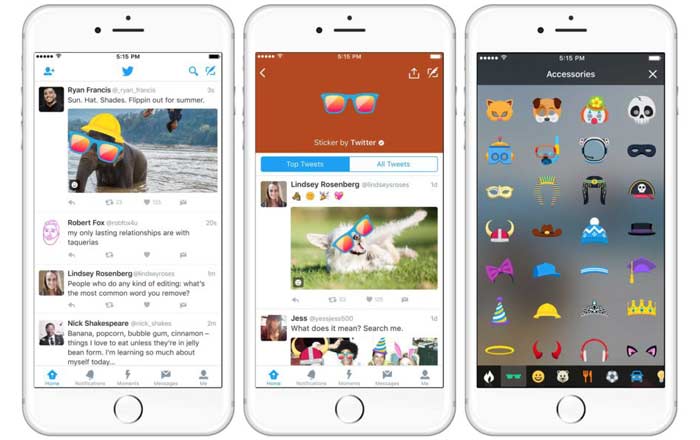 Twitter is looking to take on Snapchat with its very own sticker feature, finally allowing you to add some silly fun to photos. There’s already a huge collection of them at your service, with the stickers varying from the standard Unicode emoji to props and accessories.

Twitter’s new stickers are meant to let your creativity fly and hopefully retain users who are bored with the limited number of editing options available to them for images. You can resize and rotate them as per your choosing and place multiple ones anywhere within a single snap. The site suggests you utilize them to show your support for a cause or just add some wacky flair to a normal photo.

The brand is also adding a bit of a Twitter-esque twist to the feature to set it apart from the stickers offered by other platforms. The microblogging site’s stickers are searchable like hashtags. This means clicking on a sticker will automatically open up a new timeline where you can see how that particular one is being utilized by users around the globe.

Twitter is calling this ability a visual spin on the traditional hashtag. It’s certainly an interesting feature and may just manage to gain some traction among the Twitterati. The company is also trying to make finding a sticker easier by creating collections for a particular event or time of the year such as graduation and the start of summer.

Twitter’s new stickers are currently being rolled out to iOS and Android users of its app right now and should hit everyone within a couple of weeks. You can download the application via the Play Store or App Store.